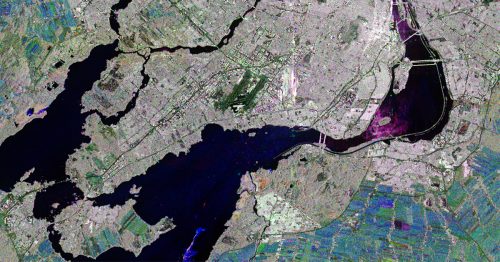 Canada is partnering with the United States, the EU and a company called, Blue Observer, in a mission measuring climate change in the Atlantic Ocean — it’s using a 24-metre sailing yacht to deploy robotic sensors. The research is part of the Argo program, a network of 3,800 floating sensors around the world.

About 1,000 Argo profiling floats must be released each year to sustain the Global Ocean Observing System, an Intergovernmental Oceanographic Commission program and part of UNESCO.

The sensors gradually descend 2 km beneath the surface and return to the top, taking temperature and salinity measurements as they go. Every 10 days, the float breaks the surface to upload data to a satellite. The information is used by weather forecasters and scientists who can chart ocean warming in real time.

Calgarians can now explore the history of Chinatown and the area’s buildings through an online interactive map. The map was created by artist and architect, Cheryl Wing-Zi. Based in New York City, Wong was the artist in residence for the Calgary Chinatown Artist Residency, a position created by the city and The New Gallery.

For the past two years, Wong has been collecting historical floor plans, blueprints (including fire insurance maps from 1911) and photographs of Chinatown’s buildings, and speaking with community members. This was all in order to create the project she titled Reflective Urbanisms: Mapping Calgary Chinatown.

Statistics Canada‘s first survey of urban green space shows that cities across the country are getting greyer and browner. Satellite imagery was used to estimate the amount of green space in Canadian cities – parks, urban trees, even backyards and lawns. The researchers looked at 31 urban centres of various sizes across the country. They compared satellite images from 2001, 2011 and 2019.

They found about three-quarters of large and medium-sized cities were less green in 2019 than they had been 20 years earlier.

Some cities that lost the most greenspace are Kelowna, B.C., which went from nearly three-quarters green to less than half. Milton, ON., went through a similar drop, as did Winnipeg. Toronto, Montreal, Vancouver, Calgary and Edmonton all lost green space. Saskatoon and Regina were among the few that gained.

Urbanization is a big driver of green space loss, Milton grew by 350 per cent over the course of the study and Kelowna’s population grew from 150,000 to 223,000. Other factors such as drought or insect infestations also play a role. Winnipeg’s losses, for example, were exaggerated by the emerald ash borer.

We are beginning to hear announcements on new projects as a result of this strategy and funding:

The federal government says it’s granting $8 million to companies to help them take advantage of satellite data. The 21 grants are to support projects from crop surveillance on the Prairies to sea ice safety in Nunavut. The data is being made publicly available from a series of Canadian satellites, including RADARSAT.

The company Geosapiens receives nearly $300,000 in funding from the Canadian Space Agency (CSA) to develop innovative approaches that use Earth observation data to better manage floods through prevention and crisis management.

WatSyn Solutions has supported digital transformation in the water industry since 2002. Through key partnerships with industry leaders, WatSyn is uniquely positioned to assist Canadian municipalities and consultancies in the selection of software solutions for modeling, managing, and optimizing water, sewer, and stormwater systems.