Distinguished Carleton University researcher Fraser Taylor has received a coveted Killam Prize worth $100,000, the Canada Council for the Arts announced Wednesday. The news means that Carleton has captured two of the 10 Killam Prizes and Fellowships awarded in Canada this year.

Taylor, a Distinguished Research Professor and Fellow of the Royal Society of Canada, introduced the new discipline of cybercartography to the world, with its capacity to illuminate socio-economic issues.

In March, the Council announced a Killam Fellowship for Carleton’s Manuella Vincter, who will continue her work on the globally collaborative ATLAS physics experiment.

“Carleton is a global centre for creative and collaborative research in both the sciences and social sciences,’’ said Carleton President Roseann O’Reilly Runte. “The important work of these two scholars is absolutely essential.” Their contributions change the way we think and work and make a truly worldwide impact.’’

Taylor has demonstrated the power of cybercartography, an enhanced form of multimedia mapping using geographic information management that deepens the understanding of socio-economic issues. 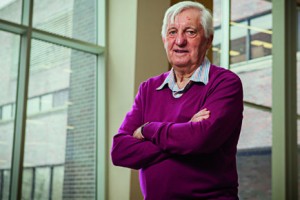 In Canada, and around the world, his cybercartographic atlases have delivered new perspectives and a way to comprehend complex issues such as trade and economic patterns, international development and the risk of homelessness.

“This is the first time the Killam Prize has been awarded to a cartographer and I am proud to see the discipline recognized for its important contributions,” said Taylor. “I share this honour with my team and I look forward to continuing our research on cybercartography.”

Taylor recently co-edited the book, Developments in the Theory and Practice of Cybercartography: Applications and Indigenous Mapping and he continues to apply his expertise with Inuit and First Nations communities in Canada.

He is actively engaged in the new United Nations Initiative on Geospatial Information Management, which seeks to address key global challenges through more effective use of global geospatial information.

Vincter’s research addresses both the fundamental interest in better understanding Standard Model processes and the Higgs mechanism at the Large Hadron Collider (LHC), as well as how this correlates with the potential of new physics discoveries beyond the expected. Her work will address fundamental questions about the origins of the universe. This fellowship enables a leading Canadian contribution to fundamental science, enhancing the visibility and reputation of Canadian physics on an international stage.

“This fellowship enables me to fully dedicate my energy and time to research over the next two years,” said Vincter, Canada Research Chair in Particle Physics. “As part of the ATLAS team, I will continue to strive to gain a better understanding of the Higgs boson, whose existence helps elucidate how all matter acquires mass.”

Fellowships are awarded to full professors at Canadian universities and research institutes who have an outstanding reputation in their area of research. The fellowship provides $70,000 a year for two years.

“The Canada Council joins all Canadians in paying tribute to this year’s Killam Prize winners — individuals who have boldly and consistently pushed the boundaries of our understanding of the world,” said Joseph L. Rotman, chair of the Canada Council. “Each has aspired to excellence in their chosen disciplines and to improving the lives of people around the globe through their research and scholarly pursuits.”

Carleton University is home to exceptional researchers having an impact in Canada and around the world. Learn more about our Killam winners and other top researchers at: research.carleton.ca.