I had a chance to attend the 2017 GeoAlberta conference earlier this month in Calgary, Alberta. This was my first geospatial event and I had heard from Jonathan Murphy, the Managing Director of GoGeomatics, that Alberta organizes one of the best geospatial events in Canada.  As a regular contributor and editor for GoGeomatics Canada I was given the opportunity by the GeoAlberta organizers to attend and share my experiences with the community.  My hope is that others like myself, young geomatics professionals, will attend more events like these in Canada.

What is GeoAlberta all about?

GeoAlberta is a chance for geomatics professionals from Western Canada to meet, mingle, and learn about all the goings on in the Canadian geospatial sector. This year’s theme was Learn, Share and Network. I was excited to see the event attracted a broad and diverse section of the geomatics community and was not limited to surveyors and GIS specialists alone. Attendees came from a broad range of the private and public sector, including municipalities, natural resources, planners and government policy makers. My rough count on the day I attended was there were around 200 conference attendees.

As a young geospatial professional it’s important to me to be able to network and get in front of potential employers.  GeoAlberta provides ample opportunities for those like myself who want to do that.  I chatted with conference attendees who had traveled from all across Alberta, including Edmonton, Red Deer and Rural Alberta. This year, I learned roughly 50% of the conference attendees were first time attendees and the younger demographic population was well represented. I was able to reconnect with a couple of my classmates from SAIT polytechnic but was surprised to not see more. Perhaps it’s due to the price of the conference and/or the lack publicity in certain quarters. I don’t remember seeing any promotion on GoGeomatics where I know a lot of us look for work and get news and information about geomatics in Canada.  Hopefully by my writing about it more people will learn about this great event.

Being my first time, I made an effort to learn more about the history of the event. Typically GeoAlberta is usually held in Edmonton or Calgary. 2017 was the 14th year of the conference (Source: Alberta Geomatics Group).  The event is put together by three groups. The Alberta Geomatics Group, GeoEdmonton, and URISA Alberta chapter. They do a great job.

The Venue Location and the Food:

This year, for the very first time, GeoAlberta was held at the Hyatt Regency right Downtown in Calgary. This central location made attending the event a breeze. Calgary has a bit of sprawl and I’m glad the organizers did not place the event on the margins of the city. I heard much the same from other attendees.  I attended the conference on March 22 and therefore did did not get the full two days due to work commitments. Next year perhaps.

The food at the event was excellent. Let me note that instead of just pastries for breakfast, there was a healthy breakfast sandwich. We also had the prime rib for lunch, which was a nice touch.  Did I mention the candy bar?  Oh my, there was a candy bar like you might find at a wedding. I saw more than a few attendees with grins filling up a bag will all sorts of candy. It was a fun treat for the event. Well done.

The conference used the agenda tool App WHOVA. This App was used to display the conference schedule and give all conference attendees a way to connect with one another.  This was great because it allowed everyone to introduce themselves and do some virtual networking.  Attendees also had the opportunity to complete surveys about the seminars they had attended. This reduced the amount of paper printed at the event and was environmentally friendly. I liked that.

The only downside of using an app instead of a paper option was that small percent of attendees who were not able to participate as they needed to have a smart phone to use the app.

I wish I could have attended all the days of the event. Let me make some brief points about some speakers. For me some of highlights of the conference included the speakers at breakfast, lunch, the seminars, and the tradeshow.  Unfortunately for me, GeoAlberta had a couple of seminars scheduled at the same time I would have loved to see, so it was difficult for me to choose which seminars to go to. A nice problem to have though.

Joseph Hlady, from Infrastructure Mapping, discussed how crowd source LiDAR could be collected by using Autonomous Vehicles (AV). Joseph highlighted the fact decreases in size and cost of LiDAR equipment and increases in usability plus functionality meant we are seeing many new opportunities in the sector. Joseph discussed the idea how devices like cars, drones, and smart phones could be used to crowd source LiDAR data. This was fascinating.

Chris Madland and Bryan Walker from Golder Associates described the best team environments as a combination of wisdom from experience and knowledgeable colleagues combined with young technology savvy team members. They provided several examples which emphasized the themes of safety, efficiency, visualization, better decisions and bringing people together. One example that Chris and Bryan provided was the remediation of an old mine site.  In order to determine which areas were structurally safe, they used UAV to view areas of the mine. Thus allowing their team to view potential unsafe areas and avoiding potential danger. A great use of the technology to protect the team.

One of the best parts of the GeoAlberta Conference were the diverse seminars at the event. These seminars provided attendees the opportunities to look at new techniques and learn from case studies.  As a newly minted geospatial professional outside of the classroom, I’m beginning to realize how important these events are for continuing my education now.  I have provided brief summaries of a couple of seminars I attended on March 22.

Mark Demers, GIS Supervisor, City of Edmonton –What does mobbing to web-based mobile mapping mean for us and our users?

Mark spoke about how his team at the City of Edmonton used web-based mobile mapping to improve collecting garbage and communications for citizens reporting for garbage violations. Prior to the new system, the process for citizens reporting garbage violations was a long one with communication gaps between the customers, garbage supervisors, and customer service representatives at the city.

By using web-based mobile mapping, Mark and his team were able to implement a ticket system for garbage violations. This new system allows city customer service representatives to access the ticket citizens called in regarding the violation and close communication gap that were previously occurring.

Don Kitchener spoke about his experience mapping the record breaking flood of Willow Creek in 2014. You can see it in the picture below. Willow Creek is rural municipality  located Southern Alberta that was hit hard by the flood that season. Normally in Willow Creek, water levels are low enough you can walk across the creek. Don and his team mapped out the flood prone areas as there were no previous studies determining where they were located.

Don described taking oblique and planimetric aerial photographs of the flood via helicopter.

Pictures of the Trade show

Overall, the GeoAlberta conference was a great event. I had to chance to speak to the older hands in our sector and network with new geomatics professionals from all of over Alberta.

For many in Alberta it is a time of economic uncertainty. That is especially true for us new grads. I left the conference feeling a positive energy and being inspired to learn more about the geospatial techniques I was exposed to in presentations and seminars. I want to thank GeoAlberta  and GoGeomatics Canada with providing me with the opportunity to attend GeoAlberta conference.  I hope to attend the next one if I can and that you can all join me.  Please share your comments below and I will get back to you. 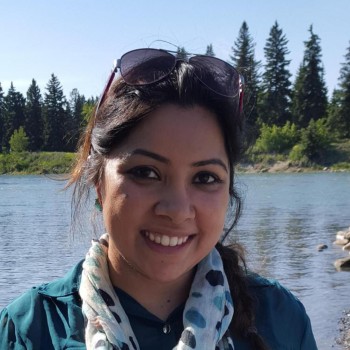