Speaking on: Setting the Sights on the Cities: The Halifax air photo mission of 1921 in the context of post-WW1 air surveys in Canada

This talk presents research into the military and civilian history, technological development, and practical outcome of aerial photography in Canada after the First World War. The collections of early aerial photography in Canada and elsewhere, as well as the institutional and practical circumstances and arrangements of their creation, represent an important part of our remote sensing heritage. It is argued that the digital rendition of the air photos and their representation in mosaic form can make valuable geospatial contributions to historical inquiries and mapping exercises today. An episode of one of the first urban surveys, carried out over Halifax, Nova Scotia, in 1921, is highlighted. A digitally re-assembled air photo mosaic and an interpretation key are presented. Using the almost one hundred year old air photos and mosaic as a guide, a variety of features unique to the post-war urban landscape of the Halifax peninsula are analysed, illustrated and compared with records of past and current land use. The pan-chromatic air photo ensemble at a nominal scale of 1:5,000 is placed into the historical context that covers a period of more than 200 years, involving thematic maps and modern satellite imagery, as well as artists’ representations that – similar to the 1921 air photos – have preserved urban street-scapes that no longer exist today. Further research opportunities and applications concerning early Canadian aerial photography are outlined, and a case is made for the long-term preservation of these important heritage data sets and their utilization in the public domain. 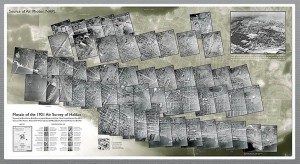 Dirk Werle is a geoscientist with a Master of Science degree in Physical Geography from McGill University.  He has been a managing partner ÆRDE Environmental Research, an environmental consulting bureau in Halifax, Canada, since 1987. He has worked as a remote sensing contractor and served as an advisor in Earth observation matters to several Canadian government departments over the past 30 years, starting at the RADARSAT Project Office in 1984. He is an active member of the Canadian Remote Sensing Society and served as Officer and Chairman of the Society for a number of years. His talk today will focus on some early episodes of remote sensing in our country and how they relate to our work today.