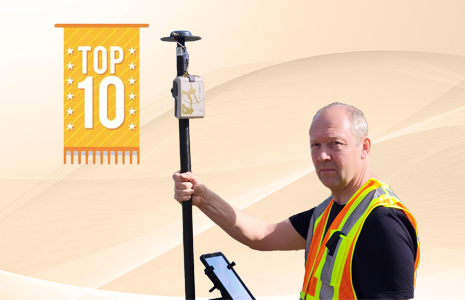 High-accuracy mobile mapping with external GNSS receivers is becoming more of a requirement across industries. In the following article, we demonstrate how organizations in sectors ranging from natural resources, such as agriculture and commercial forestry, to infrastructure maintained by local municipalities, gas companies, and others — all are benefitting from adopting high-accuracy GNSS workflows in the field.

Creating high-accuracy maps under canopy can be particularly challenging in northern Canada. In the early days of GPS, Tolko’s legacy all-in-one GPS receivers could take hours to lock onto just four satellites. Even with enough satellites, dense canopy made some signals unusable, resulting in downtime and productivity losses.

“AR models can easily appear 5-10 meters away from their true location when using the phone’s built-in GPS, which is not acceptable for a lot of applications,” Bagh said. “We knew, in theory, that using a high-accuracy GNSS device should solve the problem.” So, Dmitri got to work testing various receivers.

After experimenting with a variety of external GNSS receivers that connected to both iOS and Android devices, Dmitri settled on the Arrow Gold® GNSS receiver as the best combination of accuracy and ease of use.

The City of Montreal (Ville de Montreal) in Quebec is well-known for its rich treescape. But in 2011, the invasive emerald ash borer arrived from Asia. Almost overnight, the city’s 200,000 ash trees were at risk of sickness and ultimately guaranteed mortality from this beetle. At first the city attempted to take a full ash-tree inventory by using tools on hand (paper, handwritten field notes, and consumer-grade GPS). They quickly realized they needed higher accuracy as well as digital data-collection in order to make the project scalable. It was a race against the beetle.

Montreal staff swapped its manual data-capture tools for a real-time web map shared through ArcGIS Collector® on iPads. By connecting their iPads to Arrow 100® GNSS receivers, they were able to increase accuracy to the submeter level, thanks to real-time SBAS corrections. The robust inventory that resulted is specifically credited with helping the city to better mitigate the emerald ash borer’s dominance.

While the beetle cannot be fully eradicated, the accurate digital inventory has allowed the city to increase its pesticide treatment by 6,300% annually. This means at least 30,000 trees per year are treated with a safe pesticide that slows mortality, while Montreal can continue to execute a long-term reforestation program. Total reforestation of all the ash trees is expected to take several decades.

Enforcing a warranty can be challenging. Having air-tight documentation can help.

At the Halifax Regional Municipality (HRM) in Nova Scotia, third-party contractors are entrusted with planting the municipality’s luscious public trees. Like any living creature, these trees are susceptible to illness and other ailments that can cause them to die. Within the first two years of being planted, any tree mortality due to natural causes is covered under the parties’ warranty agreement.

In recent years, HRM enlisted the help of local students from Dalhousie University to create a complete and accurate inventory of every tree planted. Not only did the students inventory each of the 1,000+ trees planted annually with submeter accuracy using SBAS corrections to Arrow 100® GNSS receivers, but they also revisited each tree under warranty to track its survivorship. Having high accuracy GPS under light canopy provided them certainty of each tree’s identity.

With a price tag of $400 per tree replacement, HRM estimates it has so far saved at least $270,000 through this project by identifying trees eligible for replacement under the warranty agreement.

5. The Nature Conservancy of Canada Protects an Endangered Ecosystem

Recently, the Nature Conservancy of Canada sought a more efficient and reliable way of revisiting Garry oak ecosystems over time for research purposes. This critical fieldwork, performed by volunteers and researchers, tracks the health of flora within the ecosystem. The results help inform the NCC and influence the steps it takes next.

Recently, the NCC and its chief volunteer for the Cowichan Garry Oak Preserve on Vancouver Island, Larry White, replaced the unreliable and error-prone paper-mapping system with an Arrow 100® GNSS receiver and the Gaia GPS app on Android and iOS. The new high-accuracy mobile mapping technology allowed the nonprofit to transition from unreliable paper notes to high-accuracy digital mapping. The result has been faster location of critical research sites in the preserve, as well as more reliable results to inform the organization’s decision-making.

Learn how the NCC transitioned to digital mapping

During the COVID-19 pandemic, residents of the City of Burnaby near Vancouver flocked to the municipality’s well-kept public trails and parks. With foot traffic increasing, the city rushed to put up signs promoting social distancing and other pandemic-mitigation messages.

In an effort to keep track of which parks and trails had had signs installed, and to ensure all the signs could be taken down once the pandemic ended, Burnaby’s GIS team deployed a simple yet effective web map. Two crew members using ArcGIS Collector® on iPads were able to collect the full inventory of COVID-19 signs as they were installed. The Arrow 100® GNSS receivers they used provided submeter accuracy from real-time SBAS corrections, ensuring that accuracy remained reliable enough even when they were surrounded by the foliage of British Columbia’s outdoors. An ArcGIS dashboard back in the office allowed municipal staff to monitor the progress of sign installation citywide.

Whereas previously, it had been cumbersome to capture accurate as-builts, today Apex Utilities is able to capture every underground asset as it is installed. The data-capture happens in real time with centimeter-level accuracy thanks to the use of Arrow Gold® GNSS technology and Esri’s ArcGIS Field Maps mobile app. Not only is this gas company paving the way for cutting-edge data collection of as-builts, it is also saving time and money in the field.

The data-collection Zack provides can be for both above-ground utilities (e.g., gas lines, power lines, water valves) as well as underground assets before they are buried. Currently, Zack uses his digital-mobile mapping kit to ensure both accuracy and speed of deliverables for Encepta’s clients.

“As a field services technician, my main concern is reliability and user-friendliness for my team,” he says.

In upcoming months, Encepta is piloting the use of Eos Locate™ for ArcGIS® to map clients’ underground utilities in real-time, directly to ArcGIS.

Get to know Zack Henry and his work at Encepta

In Ontario, Canada, Veritas Farm Management is on a mission to change the way the agriculture industry interprets and uses data. The Veritas mission is simple: Gain the maximum amount of yield from each acre.

In order to give a full, accurate prescription for each management zone on a farm, a high degree of analysis is required. To do this, Veritas developed a process that starts with imagery analysis (from drones, etc.), continues with soil sampling, and ends with precise fertilizing and seeding prescriptions for farmers. By using an Arrow 100® GNSS receiver with real-time SBAS corrections, Veritas can provide its clients with fertilizer and seed prescriptions that are accurate down to the 1-meter mark.

“Quite often, we want to go back to the exact same spot four years later, and sample that exact same spot to see if it’s changed,” Veritas General Manager Aaron Breimer said. “With the amount of variability that we’re talking about, if you’re off by five to 10 feet, it’s going to throw your stats off.”

Like many Ontario municipalities, in addition to locating within the public right-of-way, Niagara Region provides locates at water and wastewater treatment facilities. Their biggest challenge was that approximately 40% of buried pipes could not be located with conventional methods. This was due to non-metallic pipe materials, electromagnetic interference, and incorrect tracer-wire installation.

Faced with limited legacy methods (e.g., manual workflows, third-party contractors), they sought an affordable, accurate solution to perform real-time locates in house. They deployed Esri ArcGIS Online web maps, ArcGIS Collector® on iPad, and an Arrow Gold® GNSS receiver with an on-premise base station. The result was an affordable, intuitive solution that provided 3-cm locations throughout their facilities.

The organization deployed a real-time GNSS data collection system using their own RTK base station. They were then able to implement a real-time GIS workflow that improved their ability to keep infrastructure safe through locates.

Eos Positioning Systems, Inc.,® (Eos) is the North American designer and manufacturer of high-accuracy GNSS hardware and related solutions, including the Arrow Series® GNSS receivers. All Eos products and solutions are designed and manufactured just outside of Montreal, Quebec, Canada in the suburb of Terrebonne. In an effort to support the increasing flexibility demanded by today’s field crews, sometimes called the “Bring Your Own Device” (BYOD) market, Eos has made all Arrow GNSS receivers compatible with all mobile devices (e.g., iOS, Android, Windows) and any third-party data collection app, including popular Esri ArcGIS apps and partner apps.