A Canadian Perspective: Idiots who use Drones

In the past few months there have been quite a few articles that have shown UAV’s or drones in a negative light. It’s not only humans that have been critical of UAV’s and their use but Mother Nature has gotten into the act as well. The Guardian published an article which shows video of an eagle taking out a drone in Australia. The US National park service has also instituted a ban on drones flying over national parks in June of 2014 as they worry of the negative impacts on wildlife.

I’m a huge fan of UAV’s and the positive impact they have had on geomatics in Canada and around the world. UAV’s as a data collection platform have been a game changer in terms of bringing down the price for getting a hold of data. This has been a boon to those in our industry who use remotely sensed data for analysis. However there have been instances of inappropriate use of UAV’s by hobbyists. 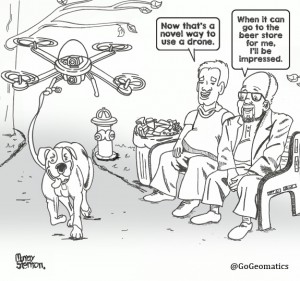 A CBC article on August 17 shows the reaction of many responsible Canadian drone operators. The fire crews fighting the Testalinden Creek fire in BC were grounded when a UAV grounded eight firefighting helicopters.

This is not the only instance of the improper use of UAV’s in Canada and below our border.

Man Tasered in National Park for Flying Toy Drone (wow over react or what?)

There have also been stories of people taking the law into their own hands when they feel their privacy and space has been invaded by UAV’s.

Transport Canada has recently published its own materials on the use of unmanned aircraft in Canada for both the hobbyists and those involved in industry and research.

An article on regulation and the rules involved for UAV’s

Experts disagree on whether Canada’s drone regulations are too permissive

It makes sense for all of us in the geomatics community to be aware of how drones are being portrayed in the media. I say this because among us are colleagues that use drones for their work, and we don’t want them to be tarred with the same brush as those who use UAV technology inappropriately. If When we hear someone disparage drones we need to step-up and tell the other side of the story. The fact that hundreds of drones are being used across Canada each day and they are of great benefit to our industry, economy, and the research taking place.

The majority of hobbyists and recreational users of drones are using them responsibly and having a lot of fun doing so.  It’s those who use the technology inappropriately that we need to educate. Perhaps issuing some fines and confiscating some drones will get the message through (tasering seems a bit of an over step). The articles above themselves are helping to get the word out about what you can and can’t do.

Here is an article that articulates the positive that I hope you read.

The game of drones: Unmanned aerial vehicles by sector in Canada