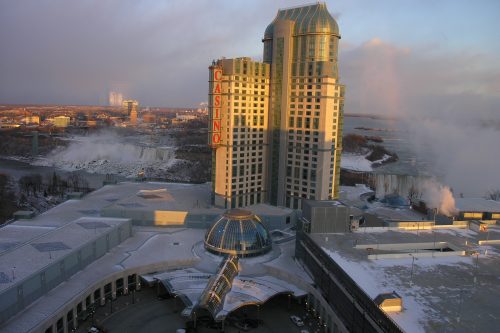 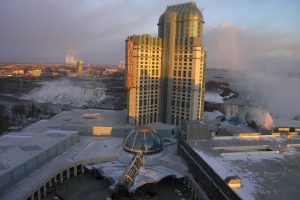 When construction began on Niagara Fallsview Casino Resort in 2001, the spectacular natural surroundings belied a particularly difficult problem for the construction companies tasked with erecting the 107-meter tall hotel tower.

Situated directly near the waterworks of Niagara Falls on the Ontario side of the river, Fallsview Casino is located on a 23-acre site overlooking both Horseshoe Falls and American Falls. Looking to take full advantage of the utterly unique scenery, the Falls Management Company (FMC) mandated that each of the building’s 374 rooms offered guests a clear view of the landmark waterfalls below.

The design team of Zeidler Partnership and Bregman + Hamann Architects worked to provide PCL Constructors Canada Inc. with an architectural plan that fulfilled this objective. But in order to do so, the project first relied on geomatics services provided by Altus Group’s Altus Geomatics LP imprint.

The company contributed its vast array of geomatics resources during the planning phase of Fallsview Casino’s construction, which was completed in 2004. These include interactive mapping of the steep Murray Hill area, and geological analysis of the Oak Ridge Moraine and Niagara Escarpment land features. Additionally, geomatics analysis was required to assist in the integration of an existing hydroelectric power plant operated by Ontario Power Company at the turn of the century.

Without a firm understanding of the geospatial science underpinning these unique geographical features, the architects and designers wouldn’t have succeeded in achieving FMC’s particular design requirements.

Fallsview over the years

After successfully solving the various geomatics dilemmas, the property opened to the public in June of that year, before adding a dedicated poker room in January of 2005.

That year, the American Gaming Association (AGA) recognized Fallsview with its Best Architectural Design for a Casino (Over USD$250 million) award.

Over the next decade plus, Fallsview Casino grew into its 2.5-million square feet of space – making it the largest gaming facility in all of Canada – establishing itself as a up and coming casino destination for players on both sides of the border. In 2016 the property was awarded the hospitality industry’s coveted Four Diamond designation for the 12th consecutive year – earning the achievement every year since its opening. To put this streak in perspective, only six percent of 28,000 CAA/AAA-approved hotels receive Four Diamond status each year.

The aforementioned poker room also provided Ontario’s card sharp community with a local venue to be proud of, and over the years Fallsview Casino has even played host to prominent series like the World Poker Tour. One of Canada’s highly skilled representatives of the game – Toronto’s own Daniel Negreanu – makes regular appearances at Fallsview Casino while traveling the global tournament circuit.

Negreanu even penned a personal blog post lauding the building’s “birds eye view of the Falls” in 2006, showing early on that the FMC’s decision to ensure every guest enjoys a stellar view of the surroundings proved to be a successful design philosophy.

Today, the Fallsview Casino serves as an economic engine for the city of Niagara, providing the year-round stream of visitors to the area with a source of lodging and entertainment that rivals many of the major regionally-leading casinos throughout North America.

The influence of geomatics throughout the Niagara Falls area is defined by the lasting impact of Fallsview Casino Resort on the city and its surrounding area. By establishing a precedent for well-planned, architecturally sensitive design based on geomatics input, Fallsview spawned even taller buildings like the 183-meter Hilton Niagara Falls Tower Two.

Residents of Niagara can discuss that influence at a pair of upcoming GoGeomatics Social events, scheduled for November 26th and December 17th at Fresco’s Euro Bar and Grill.