We can’t travel at the moment but this book might just be the next best option. Lee takes the reader on a journey through Taiwan, both historically and present-day, on her quest to make sense of her Taiwanese background. Lee’s maternal grandparents immigrated to Taiwan from China in the 1940s. They eventually move to Canada with Lee’s mother in 1974, making their way to Niagara Falls, Ontario. Growing up with her Mandarin speaking grandparents, Lee felt that she missed out on knowing much about their past. Her grandfather “Gong”, when well into years of suffering from dementia, left a cryptic letter behind describing his life. With the help of her mother and their shared memories of both Gong and Po (grandmother), this story transports the reader through Taiwan and through time, describing the island’s complex history, its geography, wars and people.

The geomatics community will appreciate the descriptions of the island’s geography, cartographic history, biodiversity, and environmental issues, both natural and anthropogenic.

Lee describes the history of land surveying and cartographic styles used to map the island. The late eighteenth and early ninetieth centuries gave birth to many geographical societies, botanical gardens and scientific groups throughout Europe. Eventually, the desire to explore extended to East Asia. Chinese and Japanese branches of cartography, geology, botany and zoology emerged. First maps of Taiwan were in traditional Chinese cartographic styles, but eventually, the mathematical style of the West took over.

The biological study became very popular in the late 1800s as well. Taiwan, like other well known islands, such as the Galápagos Islands, has a vast array of flora and fauna that can only be found there. More than 1000 vascular plant species and more than 60% of mammals occur nowhere else. While on one of her many hikes, Lee attempts to locate a very hard to find, endangered bird called the Black-faced Spoonbill. Many different plant species are also identified throughout the book.

Lee also describes the island’s past and current environmental issues. Being on the Ring of Fire, Taiwan experiences more than 15,000 earthquakes a year and faces many typhoons, monsoons and landslides. These earthquakes have shaped the mountains, literally moved lakes and have the potential to completely change the landscape at a moment’s notice.

In addition to natural disasters, Taiwan has many man-made environmental problems as well. The 1990s saw an increase in industrial growth which rapidly polluted the rivers. Also, the land has been cleared for plantations or mineral excavation, causing the island to be more susceptible to landslides.

I recommend that you journey through Taiwan and read this novel

Reading Two Trees Make a Forest is an interesting way to learn about Taiwan — a little island with a complex history. The reader goes along with Lee on her quest to learn more about the country that shaped her family and herself. You will learn a lot about Taiwan’s history, people and environment. The reader will come to appreciate how intertwined one’s location is to their experiences and how this may shape them for the rest of their life. You may also find yourself questioning your own family past – perhaps inspiring your own journey to find out about the events and geographic locations that have shaped your present life and made you as you are today.

Lindsey Goncalves is a volunteer Geospatial Community Manager for GoGeomatics Canada. In her professional life, she drafts maps for a land survey firm. Lindsey has studied geography, environmental sciences, urban planning and GIS and worked extensively in the hydro-electric sector. When Lindsey is not working, she’s either out for a run, reading or helping out with GoGeomatics.

May 25-27th: Canada’s Connecting the Dots for Multi-Dimensional Mapping with CCA 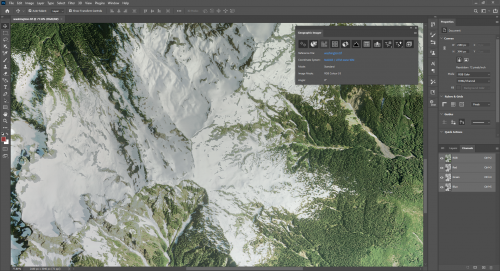 The Next Step in Your Mapping Workflow: Data-driven Map Design with MAPublisher and Geographic Imager for Adobe Creative Cloud