June 23rd marked a special day in the history of aviation and space in Canada. A very special aircraft, a Convair-580, with its advanced Synthetic Aperture Radar (SAR) sensors, made its final flight after setting records and breaking down barriers both political and scientific for several decades. The former Canada Centre for Remote Sensing (CCRS) CV-580 completed its last flight on Tuesday June 23, 2015, and will be part of the collection at the Canadian Aviation and Space Museum (CASM) at the Rockcliffe Airport in Ottawa. This aircraft served the radar remote sensing research community since 1974 when it was purchased by CCRS. It was operated by CCRS until 1996, then by Environment Canada until 2014, and finally by the National Research Council (NRC) before the transfer to CASM.

The flight by NRC pilots Paul Kissmann, Anthony Brown, and veteran engineer Theo van Westerop was under gusty and overcast conditions with a strong wind up the runway to assist with the shorter-than-normal runway at Rockcliffe. There was an appreciative crowd which included former technicians, scientists, and senior managers to greet the aircraft on this happy occasion. The aircraft first made a low overpass, then circled around for the landing. The photograph of the near perfect touchdown below was taken by Tom Alfoldi, one of the original CCRS Applications Division Scientists. 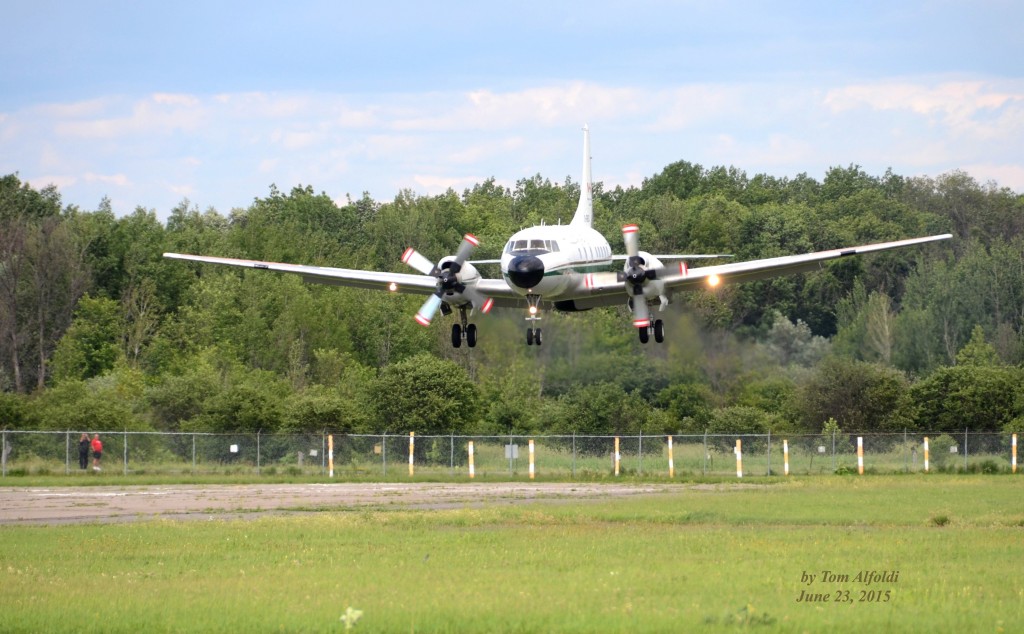 The landing came almost two years after museum curators first visited the Environment Canada Hangar to look over the system. Their determination to see the system enter its rightful place in Canada’s showcase for aviation and space was understandable: the system not only crossed over between aviation and space, it did so with great success at home as well as on the international stage. The linkage to space was obvious – the system provided the research behind Canada’s RADARSAT series of satellites, as well as several other satellites launched by the European Space Agency. It was not simply the aircraft or the all-weather imaging radar that was of interest: it was the whole package, a flying radar laboratory that was the best in the world in its time.

The system was not just a success in research. It is an example of Canadian innovation and technological excellence that has led to great success in the export market, as well as providing the proof-of-concept for several billions of dollars of investment by Europe and Canada in radar remote sensing satellite systems. What is perhaps not as well-known is the international imprint of this aircraft and sensors on board. In the 1990s it was the first foreign sensor/camera equipped aircraft allowed to acquire data over China since 1949. Furthermore, it was the first western aircraft to acquire such imagery over Vietnam since the conflict ended in that country.

Unlike others at the time, we in Canada used aircraft to prove and develop concepts before launching spaceborne systems – a cautious but effective Canadian approach. This flying laboratory is thus a symbol of how we approach scientific research: cautiously and in support of our economic, environmental, and foreign policy goals. The aircraft and the systems on board were also used to provide SAR imagery, share our experience, and demonstrate our excellence in Asia, Africa, the Middle East, Latin and South America, and of course, Europe. In many ways one may regard MDA as a creature born in part from its success.

Ultimately the system and its success were the result of collaboration between managers, scientists, engineers, and technicians in government, industry and academe who came together to build the system and use its data to establish its well-deserved reputation. It is unfortunate that a number of those responsible for its success are no longer with us; their names were certainly spoken and their accomplishments remembered by those of us who were there on June 23rd. We also owe our thanks to Environment Canada and the Department of National Defence which operated and supported the system most recently, the National Research Council, and the Canadian Aviation and Space Museum, as well as the volunteers who cooperated to make the final step happen. In the coming years we expect that there will be a significant volunteer effort to ready the system for display so all Canadians can see yet another example of Canadian excellence in science, engineering, and its application for the benefit of us all.

Detailed below are just a few of the wonderful accomplishments that came from this aircraft and its on-board equipment and data handling systems:

Dr. Bob Ryerson is a former scientist at CCRS and was Deputy Program Manager of the first GlobeSAR Program that saw the system fly in Asia, the Middle East and Africa. He would like to thank Bob Hawkins, Chuck Livingstone, and Tom Lukowski for assisting in the preparation of this manuscript and Tom Alfoldi, his former colleague of more than twenty years, for the photo.