Conversations with Michael Goodchild on Questions of Geography

Recently, I had the opportunity to sit down with Michael Goodchild and talk about his book and Geography.  Michael was my graduate student supervisor in Geography at the University of Western Ontario between 1969-72 and we became good friends.  During the 1980’s we both worked on occasion, as Associates with Roger Tomlinson.

Later during my career I moved on to the Center Of Geographic Sciences (COGS) in Nova Scotia and it was there we collaborated on a couple of GIS Summer Institutes under the auspices of the Canadian Cartographic Association (CCA). Michael left Canada and moved to University of California, Santa Barbara (UCSB) in 1988 to be one of the principal investigators of the National Center for Geographic Information and Analysis (NCGIA), funded by the National Science Foundation.  Mike has retired as Professor Emeritus of Geography, UCSB, and now lives with his wife and family in Seattle. He continues to be actively engaged in questions of Geographic Information Science and Systems.

What follows are our discussions about Geography and GIS which we shared over a few days during my visit.

Bob Maher:  You have not slowed down since your official retirement. You have just returned from Europe and the East coast. Was that business or pleasure ?

Michael Goodchild:  A bit of both – although I’m still traveling a lot rather more of it is for pleasure now I have more control over what I get involved with! I was in Washington DC for a committee meeting on a study for the National Agricultural Statistics Service, then in Austria and the Czech Republic mostly as a minder for my 9-year-old grandson while my daughter Anne was participating in a workshop on transportation engineering, then in Delaware as an expert witness defending Google’s Earth against a German patent owner.

Bob Maher: Next weekend, you are heading to London. What takes you back there?

Michael Goodchild: For the past four years I’ve been advising a project at University College London that is studying space-time patterns of crime and policing in the Borough of Camden. The project is now wrapping up and held a one-day conference to review its achievements, which are very impressive. It was interesting to have the chance to interact with the London police force (now that we don’t rely on policemen for directions any more). 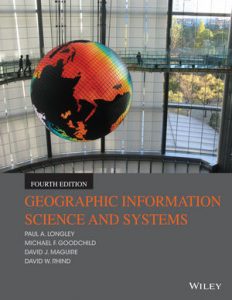 Michael Goodchild: Students and educators, in a range of disciplines that either apply the tools or create them, as it has been for the previous editions. We’ve now sold close to 100,000 copies.

Bob Maher: Why did you change the title with this edition from the old name which was ‘Geographic Information Systems and Science?’

Michael Goodchild: Because as GIS gets more pervasive and easier to use we (the co-authors and I) think it is more and more important to focus on understanding, meaning, and issues like uncertainty – things that I would call critical spatial thinking. In short, we wanted to put the science first.

Later during my visit with Michael in Seattle we spent time walking on Bainbridge Island. This gave us time to catch up, and talk about ‘questions of Geography’. Here is some of that talk which floated to the surface.

Bob Maher: Within the world of GIS, we often use ‘map’ as a paradigm for ‘geography’. Does that present a problem for us, as a society, as an industry, as an academic institution?

Michael Goodchild: I think the “map” is a very strong motivator, as people have a deep-seated empathy for maps. But at the same time it is a limitation, because there are many interesting forms of geographic information that are hard to express in the form of a traditional map. Animation, the third spatial dimension, zooming to finer scales – all of these are readily achievable in the digital world but not so easily expressed with maps.

Bob Maher: Who do you feel was the quickest to adopt GIS and who still lags?

Michael Goodchild: It’s interesting to look back at the fields that were quick to adopt GIS, and the ones that have lagged behind. Forestry was very quick to adopt, but I think there are still many untapped applications of GIS in human health and in business.

Bob Maher: How is this reflected in the 4th edition of the book Geographic Information Science and Systems?

Michael Goodchild: We devote an early chapter to a gallery of GIS applications, trying to stay ahead of the curve by featuring both traditional and novel ones.

Bob Maher: What are we saying from a ‘science’ perspective?

Michael Goodchild: We (the authors) think that GIS is a very powerful scientific tool, capable of being used to support decisions in ways that are well documented, objective, and replicable.

Bob Maher: The title suggests that there is a ‘geographic information’ science. How is that different from ‘geographic science’?

Michael Goodchild: GIS is about handling information, and its effective design rests on some well-understood principles, things that we recognize to be important in geographic information but not necessarily in other kinds of information. For example, what we know as Tobler’s First Law applies to all geographic information (though not always, which makes exceptions interesting), and with it we know that some fundamental GIS processes, such as spatial interpolation, give useful results. So geographic information can be studied scientifically, just as physics can be.Spatial_bookstore1

As Michael and I walked we discussed the funding of ‘geographic information science’ research. Both Mike and myself have spent large periods of our careers writing proposals to government agencies for research. Here to the best of my recollection is some of that discussion. 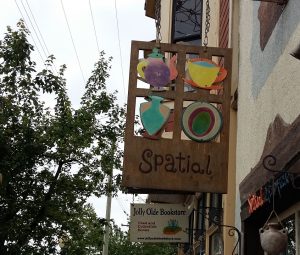 Bob Maher: Are there constraints, directly related to government funding?

Michael Goodchild: In an ideal world no. But in practice funding agencies are subject to political pressures, and are also required to nudge the research world in particular directions, such as increasing diversity.

Bob Maher: How do we assemble the appropriate mix of users, so that our ‘use cases’ address the full spectrum of concerns? It is easier sometimes, if you have a hammer (I.e. GIS) to make all problems to appear to look like a nail.
Micheal Goodchild: Yes, that’s always something we should be aware of – as is the tendency to “build it and they will come,” paying no attention to the actual needs of eventual users.

While Mike and I have known each other since 1969 (47 years) we still share our concern for Geographic Information Science and the role it can play in addressing current issues and concern in Canada, and elsewhere. Hopefully, we can revisit the conversation in 2019 (our fiftieth anniversary).

2 comments on "Conversations with Michael Goodchild on Questions of Geography"

1866: a twenty three year old blacksmith from rural Annapolis County who  could neither read nor write. 1888: a five…