Event Recap of the First National Geomatics Competition in Canada

A National Geomatics Competition is a concept developed by a Geomatics student named Justin Collett who felt that geomatics was underrepresented at post secondary competitions for students. With this aim in mind, he decided to start a National Geomatics Competition where Geomatics would be at the forefront of the competition to challenge students in their field and give more importance to Geomatics as an independent subject. Alongside his entire NGC organizing committee, they have spent over a year planning this event to bring it to fruition. You can read my previous interview with them here. It was my great pleasure to attend the event on GoGeomatics behalf. The competition was set up as a three day event with a GoGeomatics Social for the opening night, the actual competition the next day and then a conference on the following day.

NGC and GoGeomatics Icebreaker Social (Friday 16th February)
The Networking Night was a collaborative event between GoGeomatics and the NGC council whom dazzled the crowd with their random door prizes and other prizes that were awarded to people. The atmosphere in the room was electric. As the night wore on, students mingled with other students and faculty and GoGeomatics attendees as well as the sponsors. It was a fun night, with older generations reminiscing their student days to the younger students whom face a different reality today altogether. It was the perfect spark to start the first National Geomatics Competition as the students would need their ignition in gear for the gruelling six hour task they would be facing on Saturday. 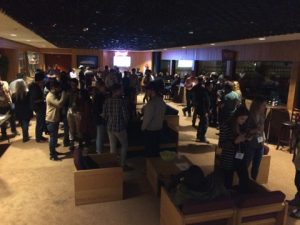 “… an opportunity to draw attention to Geomatics on a national level because it draws students from across the country.”

“…networking opportunity as well as direct contact with an industry that will challenge them.”

Lichti continued to state that

“So far, it’s gone really well and it is well organized as hospitality by UNB is great.”

The competitors were expected to be in Head Hall, UNB for a sharp 8am start with the final presentations being held at 2.15pm with each group being allotted fifteen minutes to make their case. Alexander Turner, who is the VP Academic of the NGC organizing committee, presented the problem to students which tasked them with creating a request for a proposal for a flood mapping and monitoring system in Karonga, Malawi. The competition was marked based on the competition rubric which look at how measurements were taken into account, local economic problems, data storage and accessibility as well as educational training.

All 9 teams before presenting their final product

There was anticipation in the air, but as every presenter started, the auditorium would fall silent as each member of the audience would pay their undivided attention to them. Judges and faculty were allowed to ask questions in the five minute period following the presentation which would exhibit the team’s ability to deal with unforeseen problems.

The students presentations ranged from answers involving Remote Sensing data to LiDAR as well as the best GIS software available to open source software. In terms of contingency, they tried to employ local professionals or local university students to complete their taskforce. The student’s presentations were nothing short of excellent and it was the calibre in the room that reflected the brilliance of Canadian educational institutions as to where the bright future of Canadian Geomatics is headed.

Nahleen Antika from the University of Waterloo, who was also a member of the team that placed second place, gushed,

“We loved how diverse every team was, everyone brought a fresh point of view to the competition.”

Her fellow team member, Carmen Kong, said that it was a

“…cool experience to be exposed to so many professionals in the field and seeing and comparing the different applications to see what it’s like to be confronted with a consulting problem and lots of things to be considered with the project.”

The Conference (Sunday 18th February)
The conference started at promptly at 9am in the morning like clockwork, which was a testament to the dedication and hard work of the UNB organizing committee. Dina Amer, a student from the University of Waterloo, felt:

“The conference was a delightful way to showcase the different aspects of our field. Despite companies working in the same field, they have completely different purposes and aims.”

“The first NGC was a success. Challenger was one of the sponsors of the conference and set-up a company booth which provided good networking with the all the students. I participated in the project judging, presented a talk on 3D Laser Scanning Applications in Geomatics as well as one of panel experts. I found the students to be very engaged throughout the presentations and had very good questions for the panel. The conference was very well organised beginning with the Friday Trivia – Ice breaker which provided a good social gathering between the students and sponsors. Judging the student team projects was a challenge. Each group provided their own unique scenario to complete the task. Overall all the groups did an excellent job, considering the complexity of the task and limited time to complete. The next NGC conference is scheduled to be at the University of Calgary and Challenger is looking forward to being involved and contributing to the overall success.”

I think the problem was interesting, not too difficult, and open to many different approaches based on the teams experiences and skill-sets. The process was intense for the teams (short timeline) but they all did excellent work. The time allotted for scoring was a little short and could be extended for the judges. I think the competition reached out to all regions and showed me that the institutions are all doing well with teaching the standards as well as keeping with modern technology.

The Gala (Later on Sunday)

Dinner place at the Gala

The gala consisted of a three course dinner as well as a welcoming address from Dr Peter Dare who is the Chair of Geodesy and Geomatics Engineering at the University of New Brunswick. It was the best way to wind down the event as the ballroom presented attendees with a wonderful murmur of conversation where it was evident that attendees were engulfed in animated discussions at each table.

Jake Surgenor from the University of New Brunswick, who was part of the team that won first place, said

“It was an awesome experience, and I’m already looking forward to next year’s competition!”.

I am a GIS Technician with an Advanced Diploma in GIS from the Centre of Geographic Sciences in Nova Scotia and an Honors degree with a Specialist in English Literature, Major in GIS and a minor in Sociology from the University of Toronto. Follow me @missmurrium on twitter 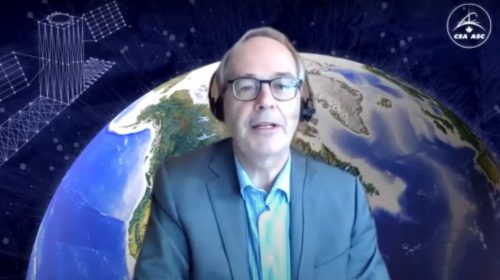 Day Two of GeoIgnite 2021 started off very strong with this fascinating keynote from Luc Brulé, the Vice President of…

YouTube: “Why is an AI company designing Canada’s hydro database?”