During the summer and fall of 2014, a team of researchers from the Department of Geodesy and Geomatics Engineering at UNB carried out the first three-dimensional survey of Kings Landing Historical Settlement, a living history museum just a few kilometres from Fredericton. Using state-of-the-art laser mapping equipment recently purchased by the department and a couple of GPS receivers, the team has produced highly detailed three-dimensional images of part of the settlement, together with fly-throughs of selected areas. 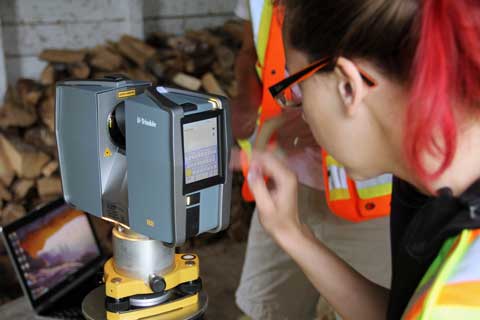 The team, consisting of Prof. Peter Dare and students Yong-Won Ahn and Renée Tardif, used a Trimble TX5 terrestrial laser scanner to capture the information required to create the 3D images. The scanner sends out millions of laser pulses while it rotates 360 degrees horizontally and up to plus or minus 90 degrees vertically enabling positioning and imaging of all the objects surrounding the scanner. In this way, information on building walls including doors, windows, and other features along with historical objects within the buildings was captured.

Fifty-five setups of the scanner were required to cover the selected area of Kings Landing, after which, the individual scans were stitched together to create one complete image. Around four billion data points were collected altogether. Subsequently, by applying coordinates of reference locations determined by students Gozde Akay and Ryan White using GPS, the positions of the features scanned were made to coincide with the legal coordinate system used in New Brunswick. 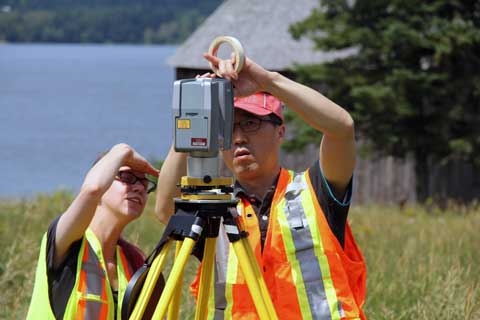 Renée Tardif and Yong-Won Ahn checking on the progress of the scanning. (Photo: Peter Dare, 2014-August-1)

This type of work creates a detailed digital inventory, which will enable Kings Landing to:

Other living history museums and historical buildings in New Brunswick and elsewhere would benefit from similar imaging of their properties. Imaging from laser scanning has numerous applications in addition to the scanning of historical properties, such as land-surface deformation monitoring and recording of crime scenes. 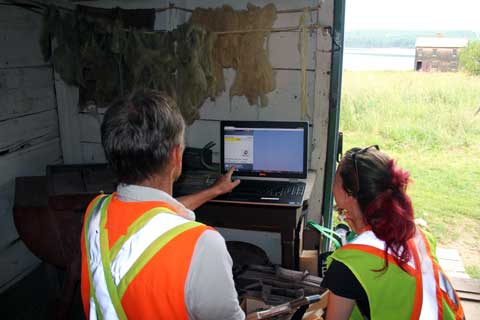 Two example fly-through movies are provided in mp4 format. One shows the exterior and interior of St. Mark’s Church, one of the two churches at Kings Landing. The other movie shows the various buildings surveyed with a preview showing the location of Kings Landing in Google Earth. It should be emphasized that these fly-throughs were computer-generated from ground-level data.

The scenes shown were illuminated by monochromatic laser light. The colour comes from colour digital photos, which the scanner takes after capturing a scene with the laser. The photos are made to overlay the point cloud from the laser measurements so that when done correctly every point in the point cloud has a three-dimensional coordinate set along with red, green, and blue colour values. 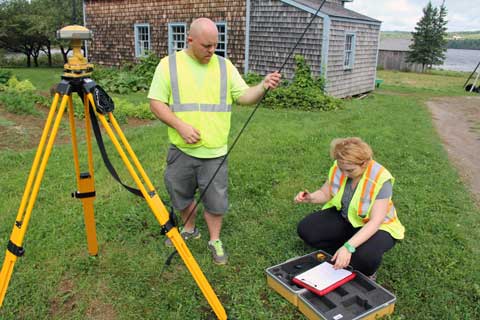