We are breaking down BC wine regions into smaller sub-regions.  How does Pinot Noir express itself in each region?  Each region has different soil, slope, latitude, elevation and climate/weather. Our current regions from winebc.org are:

First, what are classic aromas and flavours for the Pinot Noir grape?  For Pinot Noir, and wines from all other grapes, there are three types of fruit aromas:

Pinot Noir typically exhibits red fruit characters, such as strawberry and raspberry, but also may show cherries and blackberries. You may also get earthy characteristics such as mushroom, wet leaves, and leather. Warm spice notes such as cinnamon, cloves and tobacco. A more formalized table of aromas and tastings of Pinot Noir is at this link: winepros.org

The Process to Categorize BC Pinot Noir Aromas and Flavours

Step 1 – I tasted each wine over 2 days so I could get the initial aromas and flavours, right from the bottle, as-if I were a person opening a bottle and pouring it immediately at their dinner table, and then up to 24 hours later to see if the wine’s aromas and flavours had changed, due to the interaction with oxygen in the air.  I used a Riedel glass meant for Pinot Noir wines.

Step 2 – tag each wine to a vineyard in BC on a map using a Geographic Information System (GIS), and then to overlay these vineyard points on top of a digital soil map of BC.  The result of the overlay was the soil information was attached to the vineyard location, which then allowed me to aggregate the flavours and aromas by soil type. I determined that the vineyards were associated with 9 different soil types, but two in particular were favoured by vineyard owners: Eluviated Eutric Brunisol and Orthic Brown Chernozem.

Step 3 – aggregate the aromas and flavours data I collected per soil type, and see if there are any differences between soil types.  To help visualize these differences, I produced a Word Cloud graphic, where words used more often would show up in larger text and those aromas and flavour descriptors, used less, would be smaller in size.  What are the results?

The Major Soil Types Associated with the BC Pinot Noir Vines

Which soil(s) were the most common for Pinot Noir grapes in BC?  Using a Geographic Information System, I overlaid the geographic (latitude/longitude) locations of the vineyards with tasting notes, on top of soil polygons which were mapped by BC soil scientists.

The table below shows the number of BC Pinot Noir vineyards that are associated with one of the soil types I outlined above.  Within these soil polygons, these soils represent the majority soil type.  There may be other soil types mixed in, but the other soils would be a minority.

In the table below, the Orthic Brown Chernozem soil type is the most popular for Pinot Noir plantings in BC followed by Eluviated Eutric Brunisol. Vancouver Island’s unique soil types also showed up: Duric Dystric Brunisol and Gleyed Dystric Brunisol.

Unique Aromas and Flavours in BC Pinot Noir Wines

As I had primarily 2013 and 2014 vintages, most of my comparisons and comments are on the differences presented in these vintages. The BC Wine Institute Vintage Report for 2013 notes that “…red wine quality was in the Good-Excellent range, with flavourful ripe tannins and balanced acidity. The sunny summer weather in 2013 led to the earliest start to the BC grape harvest on record, up to that point.  Spring was cool but temperatures rebounded and have lower than average rainfall.  June was rainy but blooms started mid June and continued into July.  Ripening was about 10 days ahead of schedule.  September saw the temperatures dip and plunge in October.  The end of the season was wet…”

In the BC Wine Institute Vintage Report for 2014, it notes that “…the red wine quality was Very Good-Excellent.  2014 was one of the warmest years on record.  What sets it apart from other warm years was the lack of heat spikes, leading to steady and consistent temperature and growth.  It had a dry spring with about 50mm of rainfall.  Bud break started at some vineyards mid April and flowering in early June.  The hotter weather though slowed down the grape ripening as the vines shift into dormancy till temperature drops. The summer heat, followed by a cool September and a warm October harvest led to unique conditions in the Okanagan. The cool September temperatures would have slowed down sugar development, while flavours and tannins matured, and the cool nights would keep the acidity in the grapes…”

Here are the 3 main soil types and the fruit-driven aromas and flavours from the Pinot Noir grapes regardless of vintage.

What immediately jumps out is that red fruit is first in all my lists, which is when I could not determine if I could easily pick out specific red fruits, like strawberry or raspberry.  It was interesting that raspberry is more predominant than strawberry for BC Pinot Noir aromas.  Perfume is also quite prominent for our wines.

Red fruit predominates, followed by cherry and raspberry. Again strawberry is not as common a flavour in the wines.  Perfume is an important component that comes after the fruit flavours.

To read the full results of the study, read the tasting notes, and try the interactive BC Pinot Noir web map using ArcGIS Online, refer to my article Everything You Wanted to Know About BC Pinot Noir. 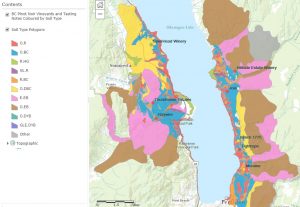 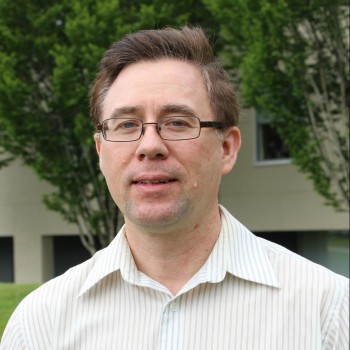 I am currently the GIS Department Head at BCIT, where I coordinate all students and instructors in the Department. I am also the instructor coordinating all student projects and practica, with external sponsors. I teach project planning, and have taught Fundamentals of GIS, ArcGIS Customization using Python, Cartography and GeoVisualization, and more.