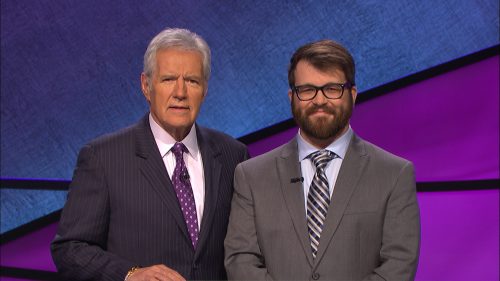 Every weeknight, my mom and I watch Jeopardy together. Jeopardy always starts with the announcement of the contestants by their profession.  Usually we hear about the doctors, the lawyers and the teachers on Jeopardy. But in December 2016, Sam Scovill represented all GIS professionals. Sam Scovill is a GIS technician from Oklahoma City, Oklahoma and a 3-day Jeopardy champion, earning a total of $56,201. I contacted Sam and asked him a few questions about his experience on Jeopardy and his GIS career.

GoGeomatics: How would you describe your experience on Jeopardy?

Sam Scovill: Being on Jeopardy is an amazing experience, but it doesn’t begin or end with your taping. I started preparing in earnest for my potential appearance over a year ago, studying old episodes through a website called J! Archive. The online quiz was a year ago this month, the audition was in August, the taping in September, and the airing in December. Each of those were big milestones.

The actual taping was one of the hardest things I’ve ever done in my life. When you’re at home yelling answers at your TV, there’s no pressure and you’re not playing against anyone. At the studio, you’re playing for cash again two other people that were hand picked by the producers out of thousands that auditioned, of which were picked out of tens of thousands who took the online quiz. Because of those stringent standards, even the people who lose on Jeopardy are ridiculously smart, and I learned to not judge anyone who doesn’t do so well on the show.

My experience on Jeopardy was also much more different than most others, as I went up against Cindy Stowell, who had passed away before any of her episodes aired. None of the contestants were told of her condition, and when I found out about her passing, I took it quite hard. Thankfully, both the staff at Jeopardy and her boyfriend Jason Hess were beyond supportive, and my despair turned to excitement, because nobody knew that this woman would end up on this amazing run despite her illness. I ended up getting a much larger exposure than anticipated and even did interviews on Inside Edition and CNN.

GoGeomatics: What was it like explaining GIS to Alex Trebek? Did you guys have any off-air conversions about Geography?

Sam Scovill: I didn’t expect him to bring that up, so I was at a loss for words as to how to describe my job in the span of ten seconds. Honestly, how do you explain what a GIS environment is to anyone outside of the field? It’s more than just maps or CAD or Photoshop, and the versatility of the platform makes it something that just can’t be described succinctly.

As for conversations between me and Trebek? Even as a champion your time is limited with him. You don’t see him until tape rolls for the episode, and he spends his time taking questions from the audience between breaks. However, the time you do spend is nice. He’s a good guy and genuinely curious. Most of the things we talked about were discussing the clues and sights around LA. One thing Alex did ask of me was to see my hand (I was born without a finger and that was my story on my first episode.) I was tickled pink when he asked to see it

GoGeomatics: Could you tell me about yourself? (I saw that you host trivia nights in Oklahoma City)

Sam Scovill: I’m a born-and-raised Oklahoman, and I have a BA in Geography from the University of Central Oklahoma. I have a second job where I host trivia once or twice a week, and it’s the only job I’ve ever had where drinking is not only allowed on the clock, it’s encouraged. I used to write questions for trivia as well, but unfortunately I couldn’t find the time to keep it up.

GoGeomatics: Can you tell me about your background in GIS? Why did you decide to go into GIS?

Sam Scovill: Social studies was my best subject in school, both grade-wise and in how much I enjoyed it. In the seventh grade, I won my school’s geography bee (something that Trebek sadly didn’t bring up, despite hosting the National Geography Bee for many years) and when I went to college, I settled in that field. I was a history major at first, but the geography department put together a presentation during my sophomore year that convinced me to switch. That’s where I first heard about GIS, and I took three semesters of GIS-based classes, including one studying the art and science of cartography.

I’m currently at my third Job that involves GIS. My first two were in the oil and gas sector, but the downturn unfortunately led me to being laid off a few years ago. Since then I’ve worked with the Oklahoma Department of Transportation. Most of my career I’ve been using the ESRI suite of products, but for the past few years I was working with GeoMedia. I’ve just recently switched back to ArcGIS, which is good because I’ve always been more comfortable with that environment, and the quality of the suite has skyrocketed since I started with 9.2.

GoGeomatics: Do you have any advice for someone who has been laid off and is looking for a new job?

Sam Scovill: For those looking for a new GIS job, keep in touch with former fellow students and supervisors from previous jobs. I still run into former bosses from time to time and they’re often on to bigger and better things. If you’re a good enough employee or you’re like enough, it’ll help out. That being said, I answered a classified sent out by OKDOT, had two interviews, and got the job. Nothing too difficult.

GoGeomatics: Can you describe what GeoMedia is? Can you discuss some of the Pros /Cons of GeoMedia?

Sam Scovill: GeoMedia is a GIS created by Intergraph. The tools and abilities are similar, but workflows and nomenclature are different enough to where you have to learn your way around the software. It doesn’t have nearly the install base of ESRI, so support from community just isn’t there. I can see how GeoMedia would have been a wonderful option a few years back, but I didn’t start using the platform until 2013, and by that time ArcGIS had added so many improvements and features that they had become the clear leader in this field. When I work with GIS, I’m usually doing work with editing spatial data and attributes, doing spatial queries, definition queries, and georeferencing, and I can tell you that those things in an ESRI environment are just flat-out better. It’s not so much that GeoMedia is bad as much as it’s that ESRI is just that good. I don’t know if GeoMedia even has an equivalent of model builder, for what it’s worth. 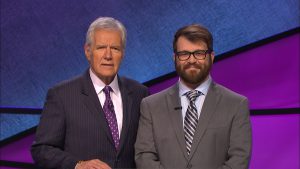 GoGeomatics: How did having a background in GIS help you with your preparation on getting on Jeopardy?

Sam Scovill: I hate to say this, but…not much? GIS is a powerful tool that has very broad applications, but the skills and knowledge needed to use the platform are rather specific, so I don’t think they’d make for good clues. My knowledge in the field of social studies on the other hand helped immensely. The first Final Jeopardy was geography-based, and I was able to figure it out thanks to that. There were numerous other categories in the social studies too, and that of course helped out a lot.

If there was a category about programming languages or anything involving raster vs vector etc. then I could say that GIS did help. And I want to say that those things have been clues in the past, but don’t quote me on that.

GoGeomatics: Can you come up with one GIS related Jeopardy question for our readers?

The Public Land Survey System was adopted in the United States in 1785 to replace this English method of surveying, but is still used in 20 states. 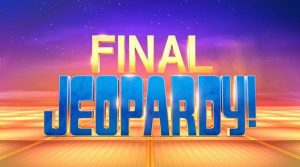 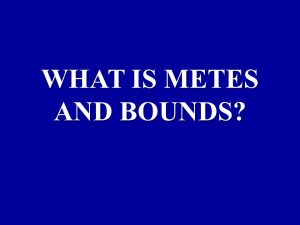 GoGeomatics: Is there anything else you would want our reader to know?

Sam Scovill: Always happy to see people supporting the GIS community! It’s a great field with great people and great opportunities. And if you want to be on Jeopardy, do these three things:

2: Study your butt off

3: Read up on wagering strategies (I didn’t and it cost me at least one day of being a champion.)

Once again, Congratulations to Sam Scovill for becoming a 3 day Jeopardy Champion and thank-you for taking the time to describe your experience on Jeopardy!