The Integrated Cadastral Information (ICI) Society and ParcelMap BC

This is the first of two articles on the release of ParcelMap BC Data, which we see as a significant event in the movement towards Open GIS Data in Canada. This month we’ll cover the background and take a quick look at what type data is available in the dataset. In our next article, we’ll take a deeper dive into the structure of the data and metadata, and provide an example or two of ways to use it, along with some suggestions for possible future applications.

On November 9, 2016 the Land Title and Survey Authority of British Columbia (LTSA) and the BC Government announced the start of a program to release ParcelMap BC (PMBC) data, comprising digital map data of land parcel boundaries and associated attributes, a subset of the cadastral fabric (see Figure 1) of British Columbia. By June of 2017, all of the data will have been released (full schedule here) under the Open Government License – British Columbia. Similar initiatives across Canada have opened up GIS data in many places – some of them are listed by Carleton University’s MacOdrum Library at Open GIS Data Repositories – Canada.

PMBC Data and the ICI Society

Let’s take a quick look at what ParcelMap BC data is and how it came to be. PMBC data is just one product of many flowing from years of work by the Integrated Cadastral Information Society (ICI Society), incorporated in May of 2001.

Since its inception, the ICI Society has worked to “to facilitate collaborative integration of spatial data from Local Government, Provincial Government, First Nations and major Utilities in British Columbia.” The organization also has numerous affiliate and associate members who contribute to and benefit from the organization and its products.

Although its goals sound simple on the surface, the ICI Society has had to work very hard to bring together numerous different organizations, many of them with competing interests, disparate systems, differing data standards, and vested interests in maintaining the status quo.

The ICI Society has been able to convince its member organizations to agree on many things such as a shared cadastral fabric and projection, data structures, sharing agreements, submission methods and schedules. Quality assurance, and myriad other details that have resulted in a common data set and shared data services.

For example, one of the ICI processes involved gathering utility representatives in round-table meetings. Here, they worked on ways to share data about the location of corporate assets, allowing others to see where assets are located, without revealing any competitively sensitive information such as the exact size or purpose of the assets. Competing companies can all benefit by using the shared cadastral data without putting themselves at a disadvantage by sharing too much information.

Another ICI Society role has been to administer a grant program encouraging local governments and First Nations to recognize and adopt PMBC. The grants defray some of the costs associated with changing data standards and mapping practices to match the PMBC standards.

The largest of the benefits of PMBC is that it provides a central source of parcel fabric information for the entire province, avoiding duplication of the effort and expense required to maintain the data, or at least parts of the data, in many different organizations. It also means that updates to the data only need to go to one location, where everyone in the province can gain access to a single “authoritative parcel fabric”. Compare this to past practices, where a simple change in property lines as a result of a new subdivision would need to be recorded separately in the databases of the local municipality, regional government, provincial government, multiple utility companies and perhaps other organizations. Now, a mandatory electronic filing, by a licensed surveyor, of nearly all new survey-plan datasets will keep the parcel fabric of the province up to date for everyone.

How can I obtain and view PMBC Open Data?

There are currently at least two viewers that allow users to explore the data by navigating through a web-map interface (see Figures 1 through 3).

Clicking on the small map on this page to opens the simple map viewer shown in Figure 2.

The relatively simple interfaces shown above, provide web-map access to the data, without many bells and whistles. However, there are some interesting filtering capabilities and some layer controls, which we’ll describe a bit in our next article.

A more sophisticated interface to the data is illustrated in Figures 4 & 5. Figure 4 shows, the Data Catalogue page provides links to pages where the publicly available PMBC data can be downloaded in various formats, as well a link to a WMS getCapabilities XML file. We’ll delve into these features in our next article—for now we’re just pointing out the existence of these resources. 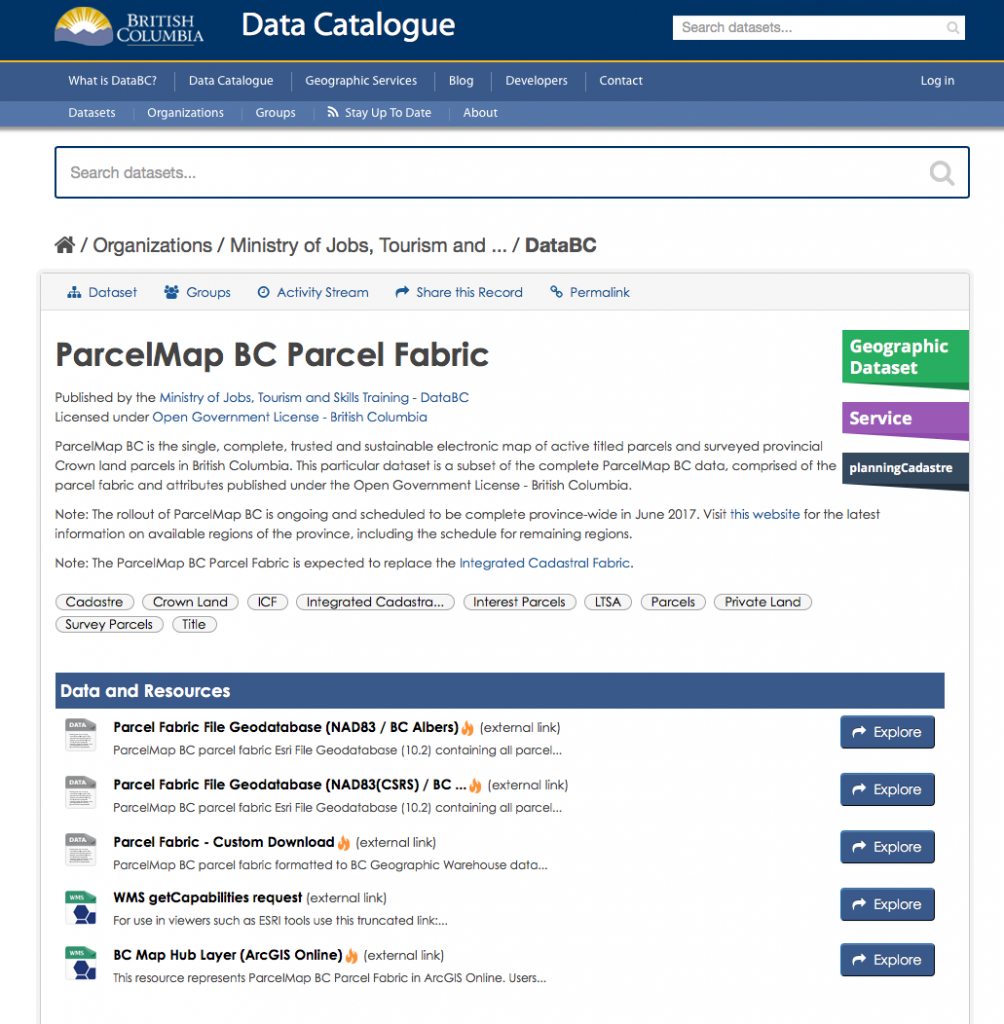 Further down the Data Catalogue page, you’ll find a button labeled “View in iMapBC”. Clicking on this button will open the map interface shown in Figure 5. This slightly more sophisticated map viewer, allows the user to add and change the visibility of layers and to perform some basic analysis such as measuring distances and areas, and to save work as a shapefile. 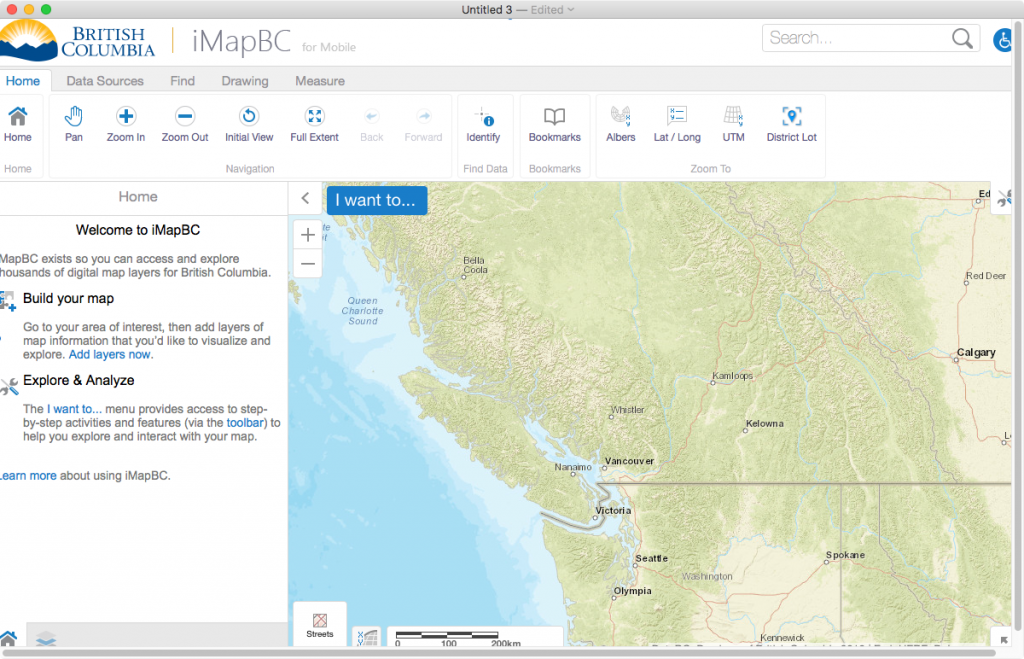 In our next article we’ll explore some of features of the map interfaces, as well as other aspects of the PMBC data. We’re especially interested in pulling some of the data into QGIS, our favorite Open Source GIS and performing some data analysis. In the meantime, don’t hesitate to let us know about similar Open Cadastral Data projects located in other parts of Canada and the world