QUÉBEC, Esri Canada User Conference – May 6, 2015 – Esri Canada today presented an Award of Excellence to Ville de Montréal for their innovative snow removal mapping application that uses cloud-based geographic information system (GIS) technology. The app allows residents to view the status of snow removal, snow loading schedules and progress in real time, as well as related parking restrictions and temporary parking sites, on an interactive map that can be accessed anytime on smartphones, tablets and desktops. As a result, the City has drastically improved its process for communicating snow removal activities to citizens during the winter season. 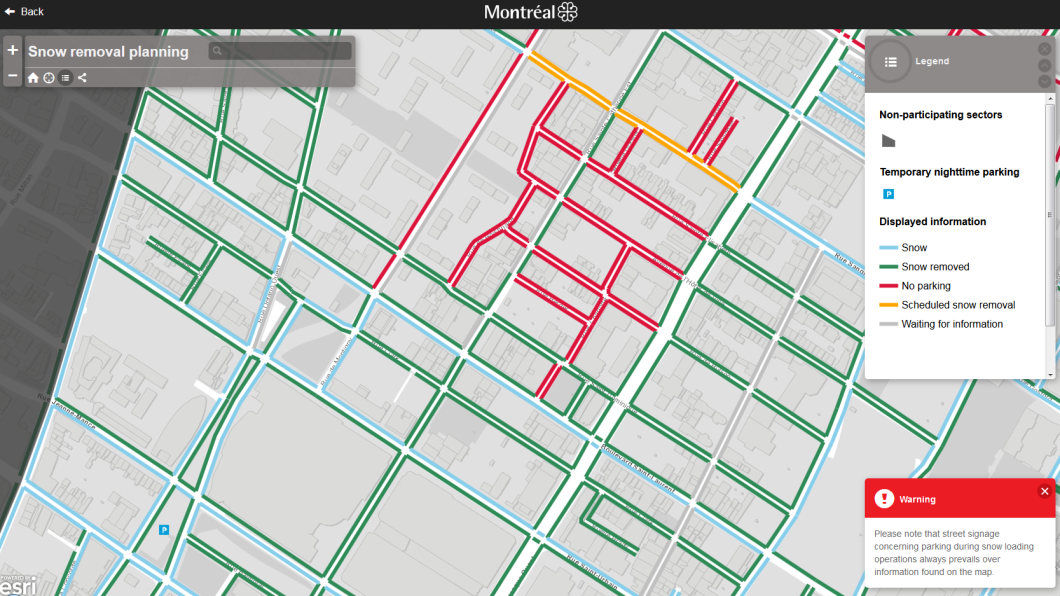 Launched in December 2014, the app supports Montréal’s Smart City initiative, which aims to digitize public services. Web maps are excellent tools for presenting information to citizens. Using the snow removal system, Ville de Montréal has been able to provide the public with timely information about their winter operations. The snow removal map has certainly allowed for improved public cooperation in keeping the roads clear of parked vehicles during snow removal operations.

The snow removal map on the City’s portal is hosted on ArcGIS Online, Esri’s cloud GIS platform, which provides high scalability to support occasional heavy surges in usage. It pulls information from an internal snow removal planning system maintained by the public works department. The app can be accessed from the City’s Web site and supports commonly used browsers. It uses Global Positioning System (GPS) functionality to zoom into the user’s location and displays information colour-coded by stage of snow removal. Last winter, the app provided data for every street in five of the City’s 19 boroughs. Because of its success, Montréal plans to expand the app’s coverage to several other boroughs for next winter.

“Ville de Montréal’s snow removal app is an excellent model of efficiency,” said Alex Miller, president, Esri Canada. “It opens up access to valuable information that City staff and citizens can use to guide their activities, resulting in improved delivery of services and increased citizen satisfaction. By embracing cloud GIS, they’re also well-positioned to pursue other innovative applications that can further increase collaboration, transparency and cost-savings for the benefit of their residents.”

Ville de Montréal is the largest city in the province of Québec and the second-largest in Canada. The City is an important centre of commerce, aerospace, finance, pharmaceuticals, technology, design, culture, tourism, gaming, film and world affairs. It ranks 16th out of 140 cities in The Economist Intelligence Unit’s Global Liveability Ranking. Montréal aims to become a global model for the Smart City by 2017. More information is available at ville.Montréal.qc.ca.