Thunder Bay, ON, Esri Canada User Conference – May 13, 2015 – Rural municipalities may not have the same information technology infrastructure as their urban counterparts, but this does not mean that they cannot achieve the same efficiencies as bigger municipalities. The West Parry Sound Geography Network (WPSGN) – a partnership of seven small rural municipalities in West Parry Sound – is a great example of this. They have significantly increased collaboration and efficiencies through the cost-effective sharing of data using geographic information system (GIS) technology. For their outstanding use of GIS, Esri Canada today presented the WPSGN an Award of Excellence. 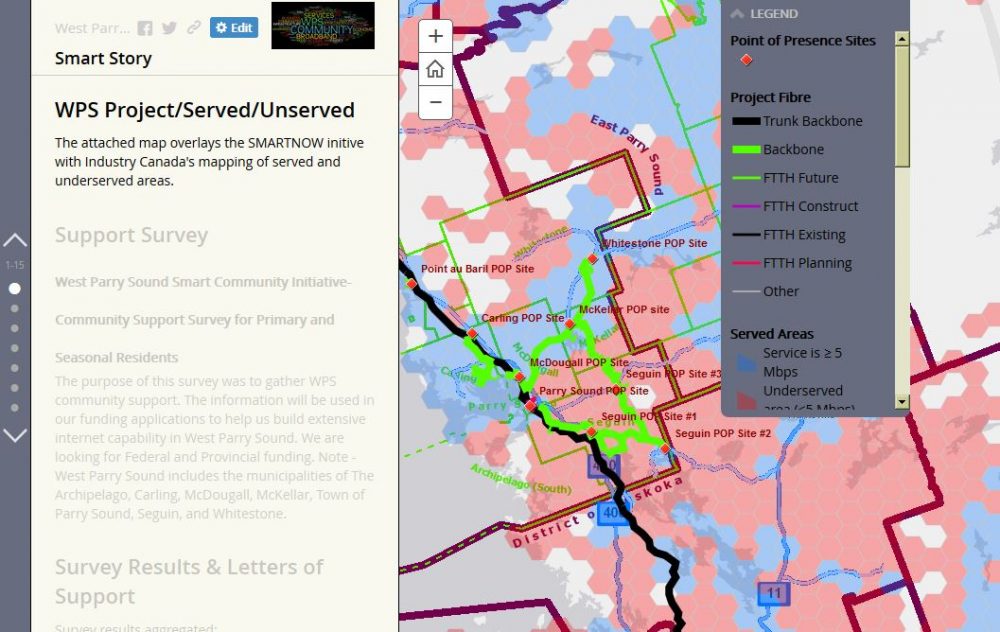 The WPSGN was formed in 2005 as a shared service focused on using technology to address the municipal partners’ growing needs for data collection and information management. One of their members, The Township of The Archipelago, had adopted GIS in the late 1990s and has since embraced the technology as an essential business system supporting municipal operations and data dissemination. To extend the benefits of GIS to neighbouring municipalities and maximize the return from pooled knowledge and resources, the Township initiated the formation of the WPSGN and continues to administer the Network. Today, all seven members have access to Esri’s ArcGIS platform, which supports various operations including 911 emergency response, planning and zoning, natural resources management, economic development, community engagement, public recreation and tourism.

With one full-time staff member, the WPSGN has developed and maintains several mapping applications that disseminate valuable information to over a hundred municipal staff and 15,000 residents in West Parry Sound. Their interactive mapping application is powered by a centralized ArcGIS for Server, which integrates and serves up data including parcels, roads and civic addresses. To support their Smart Community initiative, they created an Open Data Portal that allows the public to freely access information from municipal members and other participating organizations. Contributors maintain their data without the need for programming skills or their own GIS installation. All they need is an Internet connection to edit their data and update it to the central GIS.

“ArcGIS provides a robust centralized data warehouse that supports a variety of critical requirements,” noted Chris Mahon, GIS data management specialist, WPSGN. “It allows our members to quickly and effectively contribute, consume and analyze community data on their desktop or mobile device. The configurable templates in ArcGIS Online have also allowed us to reduce the time it takes us to build Web apps and update data from weeks to less than two hours.”

The WPSGN also takes advantage of the broad selection of configurable story map templates in ArcGIS Online to quickly deploy maps and apps. Their Smart Story App, which tells the story of how their communities are working together to build technological capacity for the area, is a creative approach to engaging the public in their Smart Community initiative.

“Story maps make it fun for users because they’re easy to use. They enable us to present a large amount of information – including photos, videos and text – in an organized, highly visual way that’s easy for citizens to understand, and help us to effectively gather support for our initiatives,” continued Mr. Mahon.

“We commend the WPSGN for the outstanding support they provide to the municipalities in West Parry Sound,” said Alex Miller, president, Esri Canada. “Their use of GIS is bringing communities together to deliver valuable self-services that improve the quality of life for their residents. It’s a wonderful example of how the technology enables smaller municipalities to become more agile in responding to their communities’ needs.”

The West Parry Sound Geography Network is a municipal partnership comprised of four townships – The Archipelago, Carling, McKellar and Seguin; two municipalities – McDougall and Whitestone; and the Town of Parry Sound. The municipal collaboration was formed to capitalize on available knowledge, budgets and resources to address the region’s information management needs. More information is available at wpsgn.ca.