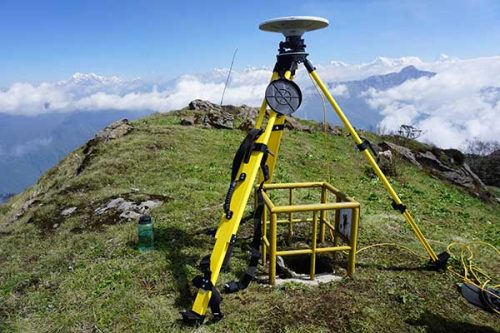 Trimble and Totalmobile have developed the first cloud-based vehicle management booking system and integrated inventory management system. This innovative system will enable EKFB to monitor, manage and analyze the status and location of thousands of trucks each day via a single dashboard. They can also track detailed information on loads, collections and completed deliveries.

The Survey Department of the Government of Nepal has completed fieldwork for the National Initiative for the Measurement of the Height of Sagarmatha (Mount Everest). Due to the limited time window on the summit, they had essentially one shot at the GNSS observations. The Nepali survey team summited on May 22, 2019 (or June 8, 2076 by the Nepali calendar).

Many of the past accepted heights for Everest have been to the top of the ice cap, which can vary seasonally by several meters. The goal of this survey is to provide heights for both aspects of the peak and to see whether the 2015 earthquakes had altered the mountain.

While the Nepalese survey team’s GNSS observations on the summit will yield the height, the final orthometric elevation will be achieved by applying an updated gravity model. The gravity model was refined from supporting surveys on the mountain and surrounding region.

By prior agreement between Nepal and China, the results of the 2019 Nepali survey, and a May 2020 Chinese survey, will be jointly announced. We eagerly await the official results of the survey.

We have long heard that a warming atmosphere has caused ice loss in the Arctic. Now, a study published last week suggests that deep heat in the Arctic Ocean has risen and is now also contributing to the ice melt. A warm blob of salty Atlantic water sits at great depths below the sea ice. As the reflective ice melts, and is replaced by darker water (absorbing more of the Sun’s energy and warmth), the warming surface water is going down into the blob. With enough heat to melt the Arctic’s ice three to four times over, the blob could devour the ice from below if the barrier of the cold surface layers ever dissolves.

While the retreat of the ice is not good, it is causing the Arctic to be easier to study. This month saw the start of the Synoptic Arctic Survey. The survey will cover the Arctic’s entirety, providing a near-simultaneous picture of currents, life, and water conditions and chemistry. The pandemic delayed all but two of the cruises, which were planned for this summer: Japan’s Mirai and South Korea’s Aron. Once completed, the survey could answer basic questions, such as whether the Arctic is a net source or sink of carbon dioxide.

China Launches Beidou, Its Own Version of GPS

China places the final Beidou navigation system satellite into orbit. Like GPS, the main, initial motivation for Beidou was military. The People’s Liberation Army did not want to be dependent on GPS for accurate positioning data of military units and weapons guidance, as the U.S. Air Force could switch off open GPS signals in the event of conflict.

Brazil’s COVID-19 case totals are second only to the United States. The pandemic has reached the remote regions of the Amazon rainforest where it threatens the very existence of vulnerable indigenous people.

Indigenous people have taken to mapping tools to document their resources, plan strategies to mitigate climate change, and protect their cultural heritage. Since maps cut across language barriers and convey a common understanding, GIS has become a tool to take action and enhance collaboration. When COVID hit, the same tools are helping the tribe safeguard themselves from the virus.