Two airplane pilots and one aircraft engineer are using drone technology to identify the presence of any pests on farmland in the Australian state of Victoria. This technology uses thermal sensing that can see through dense forest canopy to acquire high-resolution footage. This drone footage can be used to identify feral pests during the day and at night. They predict that drones could be used in the future to not only assist with pest management, however, could also count blossoms to predict yields and be able to perform pesticide or herbicide application.

Under the new Biden administration, the National Oceanic and Atmospheric Administration’s National Environmental Satellite, Data and Information Service (NESDIS) is taking on a new approach when it comes to satellites. NOAA is considering looking at European and Asian satellites as well as those launched by partners who are in the public domain to gather data from. NOAA is also working with European partners and the Canadian Space agency as it considers adding a satellite to observe polar regions. Stephen Volz, the assistant administrator of the NOAA Satellite and Information Service says that, the way to a “a more efficient approach” to observing low earth orbit might be by combining commercial satellite constellations with the instruments of the National Oceanic and Atmospheric Administration.

Studying plants from 400 miles up

Paul Lin, an earth science senior at the University of Pennsylvania, took on a project for his senior thesis that is using remote sensing data to observe changes in plant populations in the Great Plains. Lin discovered that there are two types of plats that can be distinguished using satellite imagery, the C3 and C4 plants. Distribution of these plants can be related to many factors including precipitation, temperature, and CO2 concentrations in the atmosphere. Using this remote sensing data, Lin wanted to note any shifts in the growth of these plants to see if that may indicate signals of climate change in the Great Plains.

The latest product by Concept3D, 360° Map, creates true 3D models that unlike standard 3D maps, allow the user to view the map from many different perspectives giving an experience that is more realistic. 360° Map was developed with high precision and by doing so, created a map that is extremely accurate. Concept3D has launched 360° Map with the collaboration of the Hawaii Convention Center, Indianapolis Motor Speedway, and Baldwin Wallace University. These collaborations show the potential for this new technology in places such as, convention centres, higher education, sports arenas and in tourism.

Five satellite images that show how fast our planet is changing

Five images have been used to show how earth-observation can be utilized to inform climate scientists about our changing world. The images show, sea level rise, thawing permafrost, how the lockdown has cleaned Europe’s skies showing a decrease in NO₂ concentrations, deforestation of the Amazon rainforest, and an iceberg break-off that was the size of a megacity. 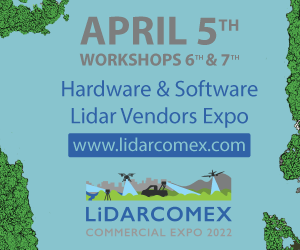