Turkey VS Russia: which map do you believe?

This week Turkish F-16s took out a Russian military jet along the Turkish-Syrian border.  Turkey is a NATO member and any conflict with Russia could immediately  trigger the collective defense clauses of all NATO members.  Canada is a NATO member so you should be paying attention.

I’m not going to go through all the details, but If you want to get a good idea about what has happened read the two articles below:

What is really interesting from a geomatics standpoint is Turkey and Russia are both arguing their case as to who is to blame for this “incident,” using maps.  The argument Turkey is making is Russia invaded their airspace and the plane had been warned.  So they shot it down.  Russia is going with the story that they never invaded the airspace and Turkey was aiding  “terrorists” by this act.

So lets have a look at the maps they provided: 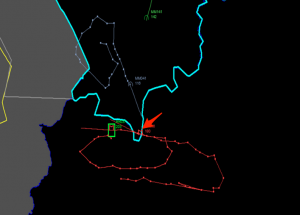 This first map is the one Turkey has put out defending their actions.

We see the blue lines are the territorial borders of Turkey and the big red arrow is showing us where the Russian plane passed through Turkish airspace. 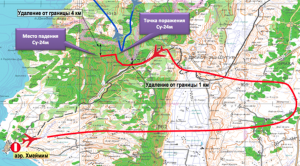 The map above is the one the Russians have put out.

Russia is using this next map which show a different flight path to the one Turkey has presented.

My first thought is the Turkish map is some sort of screen grab of an air-traffic system.  Good choice on their part.  This map has a definite air of truthiness to it.  In contrast, Russia is using the equivalent of an NTS map-sheet to make their case.  Russia could have made a much stronger case if they had put out a map that was from some sort of navigation software than this.    If Russia did have evidence they had not violated the airspace why would they not have done what Turkey has done and provided it from their navigation systems.  Perhaps they did not have enough time to produce this evidence and it will come out in the next few days?  What we should be watching for in the days ahead is how these maps evolve and are used to define the conflict that has taken place. Should make for some interesting maps ahead.

8 comments on "Turkey VS Russia: which map do you believe?"