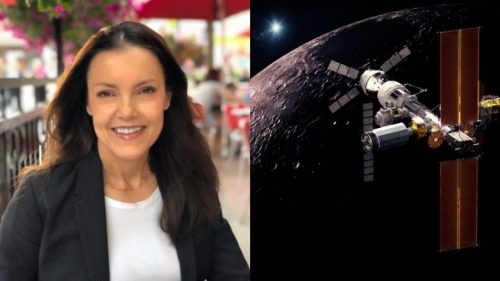 The Government of Canada announced earlier in September, 2020, that Lisa Campbell will take over from Slyvian Laporte as the president of the Canadian Space Agency. This comes at a time when the CSA is strengthening its role in space – in part through the new international lunar space station program – “The Lunar Gateway”. Canada is contributing robotic AI system, the Canadarm3. The Lunar Gateway is being designed as a stepping stone to missions to Mars.

The GPS collars scientists put on Polar Bears for research are designed to be wide enough to allow bears to take them off if they become irritating. But dropped collars just meant lost data. That is until researchers from the University of Alberta, The University of British Columbia, and Environment and Climate Change Canda, have discovered another, very valuable use for the GPS tracking collars dropped by Polar Bears.

From 2005 until 2015 the team mapped the movement of ice drift in Hudson’s Bay using the dropped collars. ‘There are no easily  accessible on-the-ground sensors, and satellite observations often cannot accurately capture the motion of small ice sheets.”…

A partnership between the Huron Community History Centre, and Western U Libraries have created the Collaborative Mapping Projects site. This site allows the collaborative production of community history by facilitating participation by communities, academics, and public historians. Several digital maps already produced by this site include:

The challenges of scientists, the media, and the public in obtaining quality data on the pandemic has shown that we have a data crisis as well as a covid-19 crisis. A joint Esri Canadablog post by Open North and Esri Canada, details multiple issues with health data collection and dissemination in Canada including:

Mapping the Impact of the Beirut Explosion on Canadian Cities

In an informative, visual article, Brooklyn Neustaeter of CTV News uses a series of maps with blast radiuses to illustrate the potential impact of a similar explosion to the recent on in Beirut on several major Canadian cities and ports:

Event Link: Should you get a GIS certification?

GoGeomatics is hosting TWO open discussions on geospatial certifications on September 30th. The first at 7PM EST and the second at 7PM MST. Click on the link here to register online via EventBrite for this free engaging event by GoGeomatics Canada.