GIS in the School System

Fast forward to 2011. I was conducting research on latest trends in education re web 2.0; and, with my Intermediate/Secondary group of pre-service Social Studies teachers at Memorial University, decided to learn Twitter. This resulted in my discovery of the how incredibly interwoven geospatial technologies have become, and how interdependent we are on them, in the 21st Century. I decided to discover the current state of GIS in the school system, the one that I had left in 2001. My results prompted me to create a presentation, Geographic Education and Technology for the AGM of Canadian Geographic Education in Ottawa in Nov. 2011. I was serving as the representative for the Atlantic Region, and new strategies are constantly brought to the table. Remember GIS is not new to us-I learned about GIS at a CGE Institute at Queen’s University in 1995. It was not new to me, because, as detailed in a previous post, I had left my teaching position with a full lab and a GIS program in place.

At this point you may ask, “What happened to that project?” It was so groundbreaking in our provincial school system that I received two teaching awards, one from the National Council for Geographic Education in 1998, and the Prime Ministers Award for Teaching in 2000. A cash award price came with the PMs Award, which I designated for GIS continuance in the school.

Any change in the school system is disruptive. There was a change in administration and in my position. I have no idea why the GIS project was not continued, and I suspect the money went where a lot of money in the school system goes, into general revenue to pay or maybe not pay for equipment and supplies. That is one of the greatest disappointments in my career after so much money, time, and effort from me and my partners.

What I did learn in my research was, in the intervening years, that geography was alive and well, but integrated and hugely technical outside the school system. But if everyone is on the technical paradigm shift in the school system (I won’t bore you with the details), why hasn’t GIS taken off? It’s the perfect way to enhance and enrich geographic education in the schools, to teach critical thinking skills such as problem-solving and decision-making, and satisfy STEM related standards/outcomes. As Tony Quartararo of Fulcrum put it succinctly in his online blog, “Geography is the science of everything.”

The nature of geography, the current curriculum, fear of technology, cost, space, time, expertise, and teacher-training are all offered as reasons. After spending almost all my life in the school system, I DO know that much of what happens is either in response to what is deemed relevant to the society/culture at the time, what is popular politically, and for what you can garner support.  Take for example bilingualism. After the official languages act, every English parent in Canada expected/demanded French language instruction. Post the rise of technology in the late 60s, early 70s, it was Science and Math. Then through the 80s and 90s, everyone had to do business, and enterprise education/entrepreneurship grew in popularity. Parallel to all these ran the exponential growth of communications/the digital world. That was followed by the ‘literacies’: basic, numerical, scientific, and, yes, even ‘geoliteracy’.  Now it’s the impacts social media and its pro/cons., e.g. cyberbullying.

If the parents for French demand inclusion in the curriculum, they get it. If math, science and business leaders demand more time/space in the school curriculum, it happens. Technology? Labs, wiring, and gizmos appear everywhere. Classroom set of iPads? No problem. Kids being exploited and bullied online-we’ve got it!

A conclusion from this ‘jumping on bandwagons’ reaction is that trends are noticed, (governments after all, are in charge of the education system), and the old adage of the squeaky wheel getting the grease is applicable in curriculum development/reform.

Something for the ‘geocommunity’ to ponder until next month: Why isn’t geotech/geospatial being demanded?? 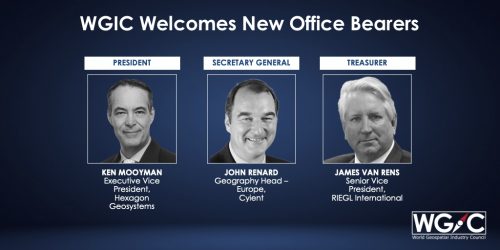