Looking Back on The CGCRT Team Canada Event

The CGCRT Geomatics Strategy, Action, and Implementation Planning Workshop took place in Ottawa June 9 and 10 at the Delta City Centre, and GoGeomatics Canada had the honour of attending both as a sponsor and an engaged member in the geomatics community. Full disclosure, GoGeomatics Canada was also in charge of the engagement and communications leading up to the event.

The purpose of the June CGCRT event was to provide an open forum to examine issues facing the Canadian geomatics community and develop a Pan-Canadian Geomatics Strategy to support, strengthen and guide the sector for years to come.

As with any free event where RSVP’s are hard to come by, organizers were concerned that attendance numbers would be low. Perhaps they underestimated the dedication of the community; it turned out to be a veritable who’s who of the Canadian geomatics sector, with over a 100 geomatics leaders in attendance from all across the country. In the weeks leading up to the event, there seemed to be a tipping point when people realized that this was going to be something different, something worth attending. It was the buzz created by the tireless pre-event communications strategies that ultimately made for the high attendance numbers – the message was all over social media, and everyone was talking about the CGCRT at events across Canada.  Kudos to the team and the CGCRT for this.

There were representatives from academic institutions, associations and NGOs, government organizations, private industry, and students. Of particular note was the large representation of surveyors; it was great to see so many of them in attendance. It was the first time many of these people had been in the same room together, and the variety of backgrounds, regions, and stakeholders all coming together was powerful.

This feeling was picked up in the introductions, which were the most inspiring moments of the event. Ed Kennedy reminded the crowd of the challenges facing us over the next two days: “We’re engaged with creating a strategy for an entire sector. We’re encouraged by the strong response to this event. There’s willingness here to position the sector for a brighter future.”

Peter Sullivan, Surveyor General of Canada, took to the podium to discuss the objectives of the event. “This is a breakthrough event,” he said. “In order to be successful and be recognized, we need to come together as a community. Great things happen when community comes together.” But it was James Boxall’s expert lecture skills and simple message that really grabbed the attention of the room and set the tone for the rest of the workshop.

Mr. Boxall indicated that his goal was to inspire attendees to think outside the box. He explained, using a picture of parallel train tracks, that we’re at the point in Canada where we have many paths, but only one destination. We have to learn new ways to approach the sector by adapting the old rules. He then drew an interesting comparison to the Apollo mission, which was saved thanks to Buzz Aldrin’s ingenuity and a $1.39 pen that he stuck in a broken circuit board. “Every part is critical,” Boxall explained. “We may just not know it yet.” He continued the moon metaphor, saying that 400,000 people went to the moon, not just three. That was the number of people it took to get those three to the moon, and that’s how the geomatics sector has to start thinking. “I look forward to getting your energy to carry us forward,” he concluded. “Now’s the time.”

From these speeches, it’s clear right off the bat that the organizers are counting on the strength of community spirit, regardless of what part of the sector participants belong to.

After these energizing talks, the real work began. Each of the seven strategy dimensions was presented by a member of the CGCRT Steering Committee, and then breakout groups were formed to discuss and add to the proposed objectives in the strategies. Because there were many suggested amendments, we’re going to hold off on publishing the results until the Steering Committee releases the final versions. Here’s a brief recap of the dimensions and their presenters: 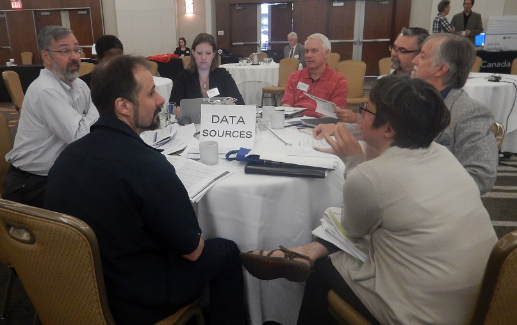 Over on the Twitterverse, participants had been tweeting their thoughts and pictures of the event throughout Day One, and into Day Two. Take a look at the event in Tweets here.

When we arrive in the morning for the second and final day of the workshop, we find that one corner of the room has been decorated by a 35×25-foot floor map of Canada from space, courtesy of the Royal Canadian Geographical Society. This educational tool makes the rounds to K-12 classes across Canada to give students an appreciation for geography, but the grownups are having fun with it too. It’s comprised of an impressive combination of images taken by Canada’s RADARSAT-2, and acts as a significant reminder of why we’re all here. After all, Day Two is going to be about putting yesterday’s ideas into actions. “Visions are great, but now it’s time for actions.” James Boxall reminds us. “I believe in tangible actions. I believe in delivering on things.” 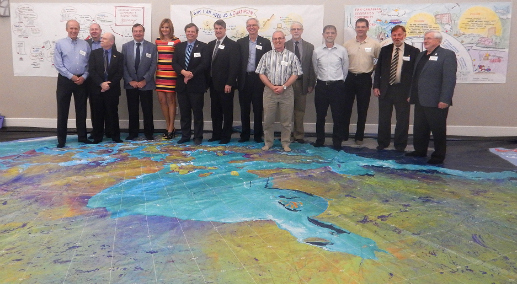 But before we could get down to business, James took a moment to present Corinna Vester with his Royal Canadian Geographic Society pin to recognize her tireless work in convening the geomatics community. It’s a touching moment. 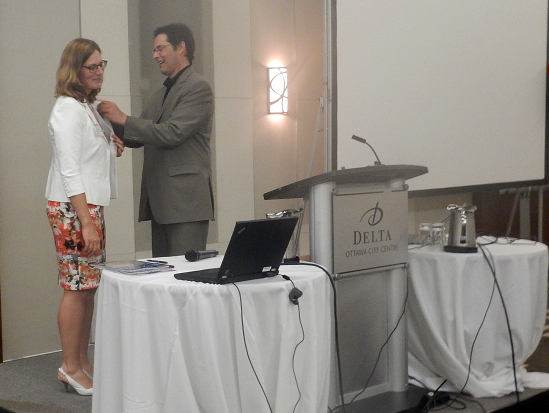 Leadership and Governance  (The Elephant in the Room)

Where day one was about ideas, day two will be about actions. The main goal of day two that the CGCRT is hoping to achieve (or at least move toward some decision) is in the area of leadership and governance. As Peter Sullivan reminds us, “We need to come out of this with an idea of what the Canadian Geomatics Community Round Table will be moving forward.” Without clear leadership in place, nothing that has come out of these two days will matter at all.

It’s communicated to the participants that NRCan’s GeoConnections’ role as a facilitator of the CGCRT secretariat will end and they will eventually need to pass the torch. This could be an umbrella organization with a secretariat that comes from different perspectives. As Ann Martin explained, “We have to find people willing to make a committed and sustained effort,” because the level of expectations are going to exceed the resources they currently have. 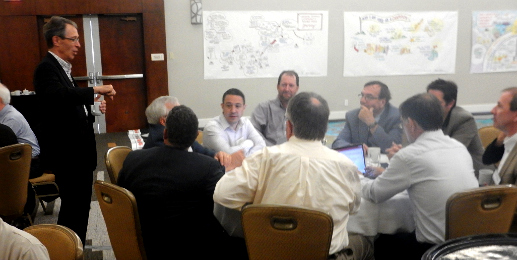 Unfortunately, the crowd was unusually silent on this topic, and the air became tense. No one seemed ready to commit to decisions. Some suggested that an umbrella organization could cripple existing organizations, while others said this was simply an unfair request. It’s the opinion of this publication that the idea of a neutral umbrella organization could have been better explained by the HAL team and the CGCRT steering committee. In the end, it was decided to move forward with the idea of another event focused on governance in the sector for the fall of 2014.

After the elephant left the room, the energy finally began to pick up. Before many items have been ticked off the agenda, everyone seems to have an opinion to add. Mostly people are discussing the objectives that were revised on Day One, but what’s more interesting (and much more heated) is the controversial geomatics versus geospatial debate.

Talk kept coming back to whether the sector should continue to use the word “geomatics”, or change it to something else entirely, although what that word could be remains undecided. This brought up the problem of Identity (Dimension 1 of the strategy) in a very real way. One participant suggested that “geomatics” means nothing on the international stage, and we must adopt more recognized terminology if we want to be considered internationally. While others were concerned that a change in terminology could negatively affect the economy, and devalue the rich history of the sector. Although the atmosphere got quite heated, this is a debate that most of these people have heard before, and it seemed to ultimately taken with a grain (or heaping) of salt. Regardless, the topic dominated break-time conversation for the remainder of the day. Eventually, with a few notable exceptions, most seemed to agree “geomatics” should remain the word used to describe our sector. The word “geospatial”, as being used by the HAL team at the event, describes the community of users of the geomatics sector’s products and services.  GoGeomatics Canada will be bringing you more on this topic soon.

The last order of business was to present the Straw Man Action Plan (presented by Ed Kennedy). This included examples of actions submitted by the community prior to the event to address day one’s objectives. Examples included:

After these ideas were presented, participants got back into breakthrough groups to come up with more suggested actions to address the objectives. Some ideas included:

At the end of the day, the Steering Committee asked for signatures from the attendees in symbolic solidarity. The signature form stated: “We, the undersigned, endorse the Pan-Canadian Geomatics Strategy and undertake to support its spirit and advance its goals.” Our very own Jonathan Murphy Managing Director of GoGeomatics Canada being the first to sign. 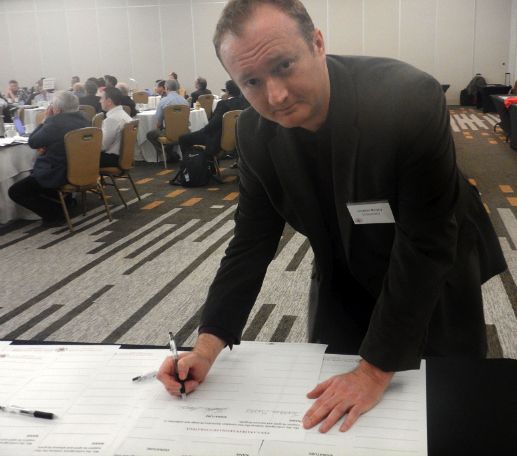 Now the ball is back in the Steering Committee’s court, and they’ll be back in touch with a final version of the strategy document and a proposed governance and leadership structure. Keep checking in with their website for these updates. “At some point, we’re going to have to accept someone else speaking for us,” says James Boxall in his final thoughts. “I’m in it for the long haul and I hope you, like me, with our passion for geography, keep that passion alive.”

GoGeomatics Canada will be keeping up-to-date with the CGCRT and will continue to bring you developments as they unfold. 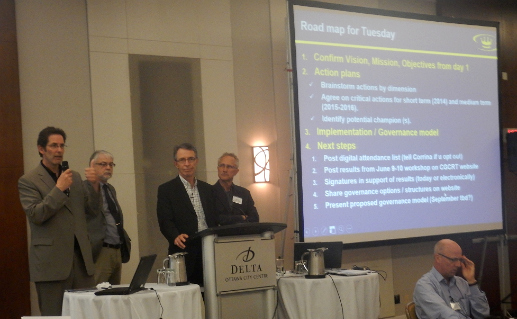