In a previous digest we introduced the ground-penetrating radar team surveying the historic site of Fort Anne. The group recently discovered what they believe to be the graves of as many as 19 Acadians, as well as the remains of several roads, paths, and a blockhouse located where the provincial courthouse now stands. MapAnnapolis has created an online map of the graveyard that will eventually include more of the 2000 graves thought to be on the site. The use of LiDAR, unmanned aerial vehicles and other GIS technology is enabling the team to see more of what lies under the ground in less time than it would take on a typical archeological dig. According to Heather LeBlanc of MapAnnapolis: “It enables us to go and look at Parish records or other maps to see what matches that particular area and then an indication of how we can widen the grid and what else we can find below the surface.”

McGill University and Université de Montréal have inaugurated a new research hub for artificial intelligence. The Mila centre will employ more than 35 professors and more than 300 researchers, who will tackle issues such as how machines recognize objects in the world and interpret what they see—a major problem facing driverless cars. AI and machine learning looks to be the foundation of the next industrial revolution, making more discerning machines essential. Mila is also home to 10 student startups and 13 corporate labs with companies like Facebook, IBM, and Samsung.

Canadian Space Agency astronaut David Saint-Jacques is using his unique vantage point from the International Space Station to better understand Earth’s geological, environmental, and ecological systems. During a space-to-Earth connection, Saint-Jacques launched Exploring Earth, a Web-based initiative used to explain how Earth works through photos taken from orbit. An interactive world map shows geological and man-made features accompanied by detailed, accessible scientific information. The project is aimed at teachers and students from grades 4 to 12 (though anyone is free to browse the image collection). Said Saint-Jacques: “I have always been fascinated by our home planet. Now, I have a chance to look at it from a completely different vantage point. I really want to share this unique perspective with students and Canadians. Through my photos, I want them to develop an interest in understanding how our planet works, and I hope this knowledge will give us all the urge to better protect it.” 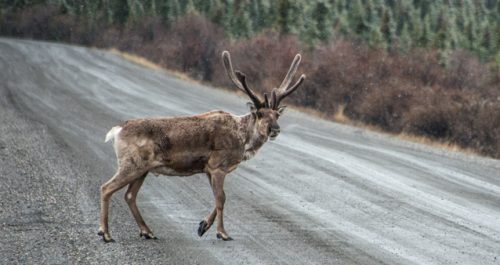 Image from the National Park Service

Canada’s caribou have officially been listed as ‘threatened’ under the federal Species at Risk Act, their numbers having decreased by more than 30 percent over the past 20 years. Traditional challenges like predators, forest fires, insects, diseases and human encroachment are being joined by the various effects of climate change as major detriments to the species. But modern science is in a position to help: NRCan scientists and researchers are working through the Canadian Forest Service and the Canadian Centre for Mapping and Earth Observation (CCMEO) to take action. By applying bio-economic modeling to determine the most cost-effective habitat restoration strategies, scientists like Denys Yemshanov are looking for optimal ways to restore critical landscapes for the caribou.

Participants in Ontario’s automated vehicle pilot program are now allowed on public roads—under strict conditions. Ontario is the first jurisdiction to allow on-road testing; BlackBerry’s QNX, Magna, Uber and the University of Waterloo are currently testing 10 vehicles, but aren’t yet using totally driverless cars. Members of the public will also be able to drive Level 3 conditionally automated vehicles, which manage most safety-critical driving functions, though the driver must be prepared to take control at all times. The pilot program can also now test platooning technology, which lets commercial vehicles with smart technology communicate with and follow one another. This function could save fuel, reduce greenhouse gas emissions, and improve road safety.