The Alberta-British Columbia Boundary Commission has just completed a monument restoration survey to restore a number of deteriorated provincial boundary monuments in the Elk Pass area of the Rocky Mountains. The work was undertaken by Jamie Hume, BCLS, ALS, SLS, CLS, P.Eng and the commission signed the final plans at their face-to-face meeting this spring in Edmonton.

A Brief History of the Alberta-BC Boundary Commission:

British Columbia joined confederation in 1871, with Alberta following in 1905. The Alberta-British Columbia boundary was originally described as being “from the Boundary of the United States northwards by the Rocky Mountains and the One hundred and twentieth Meridian of West Longitude”. “By the Rocky Mountains” was determined to mean the height of land separating the drainage basin of the Pacific Ocean from those of the Arctic and Atlantic. However no surveys had been done to officially mark the boundary. In the early 20th century, increasing pressures from settlement, dispositions of coal and forest tenures and the construction of roads and railways drove the need to survey and mark the height of land portion of the provincial boundary. 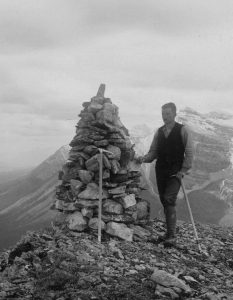 In 1913, the governments of Canada, BC and Alberta formed the Alberta-BC Boundary Commission with the task of determining and marking the boundary between the two provinces. Arthur Oliver Wheeler was appointed as the BC representative, Richard William Cautley was appointed for Alberta, and James Nevin Wallace was appointed for the Dominion government.

The first priority in 1913 was the survey of the numerous passes through the Rockies. Because these passes were typically the areas with the most intensive development and the least obvious height of land, the commission surveyed the passes as a series of straight boundaries that approximated the true height of land. These straight-line boundaries were cut out to a width of six feet, and concrete monolith monuments were placed at each deflection.

The more rugged portions of the boundaries were surveyed by Wheeler to determine the true height of land boundary, using photogrammetric techniques that were considered cutting-edge for the time period. Wheeler built large rock cairn monuments along his portions of the boundary. Wheeler’s surveys did more than just locate the provincial boundary: they also mapped large areas of land on either side of the boundary for the first time, providing excellent topographical information in an otherwise uncharted region. 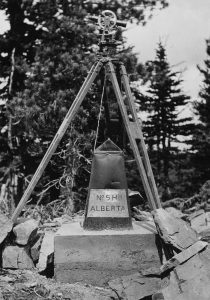 By the time the Commission went dormant in 1924, it had surveyed the entire length of the height of land portion of the provincial boundary, plus the first third of the straight boundary northward along the 120th Meridian. The surveys done by the commission between 1913 and 1924, being a combination of Cautley’s straight-line boundaries through the passes, Wheeler’s surveys of the more remote height of land boundary sections and the completed portion of the 120th meridian, were adopted by legislation passed by the three governments as the official provincial boundary.

The Commission re-established itself in the 1950’s to survey and monument the rest of the 120th meridian, all the way to the 60th parallel, largely in response to increased oil and gas activity in the northern reaches of BC and Alberta.

The Boundary Commission continues today, meeting twice yearly to discuss matters relating to the provincial boundary.  Currently, Peter Sullivan serves as the Commissioner for Canada, Ravi Shrivastava for Alberta, and Mike Thomson for British Columbia.  One of the commission’s several roles is the ongoing preservation of the boundary’s monuments.

As one can imagine, many of the concrete monolith monuments placed by Cautley one hundred years ago have weathered and are now in poor condition. The commission received a report in 2011 prepared by the Bow Valley Provincial Park Stewards, a local volunteer organization, indicating the deteriorating conditions of the monuments in the Elk Pass area. Many of the monuments, given their proximity to hiking trails, had also been vandalized over the years.

In response, the commission awarded a contract in 2012 for a land surveyor to inspect and make recommendations on Monuments 1M through 14M in the area, these monuments were all concrete monoliths set by Cautley in 1916. Upon reviewing the recommendations, the commission elected in 2013 to proceed with restoration of 10 of the 14 monuments; the intent at the time was for the land surveyor who did the inspection to carry out the restoration work as well. Unfortunately, 2013 was the year that brought unprecedented flooding to the southern portions of BC and Alberta and the site was rendered inaccessible.

Following a number of issues that prevented the survey from being carried out in the summer of 2014, the commission invited new proposals from survey firms for the restoration work to go forward in the summer of 2015. The successful proponent was CIMA+ Geomatics Land Surveying Inc. of Calgary, with Jamie Hume to be the land surveyor of record on the project.

The contract called for the restoration of 10 monuments in Elk Pass. The most visible of the 10 – Monument 1M, which is located right beside a popular hiking trail – was to be restored in the original concrete monolith design. The other nine monuments, which were decidedly more difficult to access, were to be restored using standard capped post monuments driven through the remnants of the original monoliths’ concrete bases. The restored monument locations were to be measured and georeferenced to a modern standard.

Survey returns called for a survey report – detailing the evidence found, “before and after” photos, and details of the placed monumentation and ancillary evidence – and a survey plan prepared in accordance with the federal National Standards for the Survey of Canada Lands. Copies of the plan and survey report will be filed in each of the repositories for BC, Alberta and Canada.

The area for the Elk Pass survey is located in the Rocky Mountains, approximately two hours’ drive from Elkford, BC and is adjoined on the Alberta side by Peter Lougheed Provincial Park and on the BC side by Elk Lakes Provincial Park. A popular hiking trail follows a portion of the provincial boundary in this area.

The most viable access to the area was determined to be from the BC side; the survey crew was able to park in a parking lot at the Elk Lakes park boundary and then ride ATV’s along a right of way that took them to the provincial boundary. Once at the boundary, all subsequent transportation was on foot, partly due to terrain, but also due to restrictions on the use of ATV’s within the provincial parks. 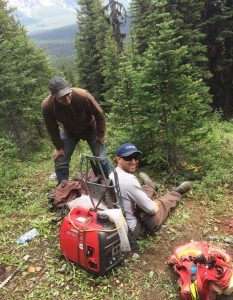 Jamie Hume divided the field work into two separate trips. The timing of those trips needed to be planned late enough in the year to allow the snow to melt, but also needed to coincide with the wishes of park staff to keep the crew out of the park during critical grizzly bear feeding times.

Jamie and his crew made the first trip in July, and this trip was committed primarily to assessing the existing survey evidence, restoring all ten monuments, and planning for the survey measurements. Jamie then returned to the field in September to tie in all the monuments; all points had sufficient views of the sky to allow direct observations with GNSS equipment.

Jamie’s preliminary survey report and plan were forwarded to the commission in the fall, and after a few edits and revisions, we received the final products which were signed by the boundary commissioners in May. Jamie was kind enough to provide me with the photos that are included in this article.

The Elk Pass restoration survey has saved a number of monuments from being lost and will serve to keep the boundary well-marked for the next hundred years. The commission hopes to be able to carry out similar restoration surveys on other critical portions of the provincial boundary in the years to come. 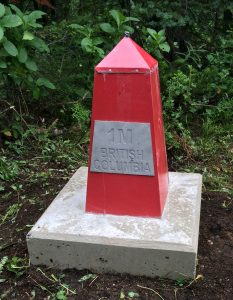 On a related note, author and historian Jay Sherwood is currently preparing a book on the history of the original Alberta-BC boundary surveys. The book’s release is anticipated to coincide with the celebrations marking Canada’s 150th birthday in 2017. I am very much looking forward to Jay’s telling of this important piece of Canada’s history.

This article was first printed in the 2016 August edition of “The Link” and written by: 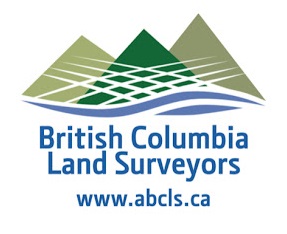