Required reading in numerous U.S. history survey courses, it is the consummate tale of human folly: the Dust Bowl.

The Dust Bowl, or the Dirty Thirties, was a period of severe dust storms causing major ecological and agricultural damage to American and Canadian prairie lands in the 1930s, particularly in 1934 and 1936.
— source: Wikipedia

This tragedy chronicles the rise and defilement of technology, the social injustice of tenant farming, and the ecological ravages of commercial agriculture. The protagonist is the natural grassland, and the antagonist is the farmer who misuses that land. It matters not whether this misuse was perpetrated out of an innocent ignorance or out of thoughtless greed. What is important is that the original crafters of this narrative successfully used it to sell their radical reorganization of American agriculture. And modern-day environmentalists continue to wield it as their “Remember the Alamo!” rallying cry.

But what if GIS tells a different story, one not so steeped in madness or the spectre of human evil? In this month’s Out of Place, we take a critical look at the standard Dust Bowl story, based on Geoff Cunfer, PHD‘s revealing essay, “Scaling the Dust Bowl” (in the book Placing History: How Maps, Spatial Data, and GIS Are Changing Historical Scholarship).

I love counting. There’s something elegantly disarming in the power of raw numbers, something that cuts through the chaff and gets right to the heart of an issue in a way that nothing else can. I’m reminded of a great story by the late Jim Rohn:

John joins this little sales company. He’s supposed to make 10 calls the first week just to get acquainted with the territory. So on Friday we call him in and ask, “How many calls?” He says, “Well.” You say, “John, ‘well’ won’t fit in the little box here. I need a number.” Now he starts with a story. And you say, “John, the reason I made this little box so small is so a story won’t fit. All I need is a number because if you give us the number, we’re so brilliant around here we could guess the story.”

With that nugget of wisdom in mind, let’s examine this convicting New Deal story, namely that farmers “took a pristine wilderness that had been nurtured by Native Americans for ten thousand years and turned it into a wasteland in a matter of decades.” This narrative is predicated on the claim that dust storms only happened after the massive plow-up of the 1920s. Well, if the story is true, it should be a simple matter to count the number of dust storms before and after the plow-up and arrive logically at the damning conclusion.

Before we begin counting dust storms, however, let’s look a little closer at the monograph mentioned earlier, the one which has become required reading over the last two decades. In Dust Bowl: The Southern Plains in the 1930s,

Donald Worster develops moving accounts of the residents of two counties, one in Oklahoma and the other in Kansas. He then asserts that their experience represents the southern plains generally. One can’t really find fault with Worster for this approach. After all, GIS was nearly unheard of in the ’70s when he was writing, and we’re talking over 200 counties (208 to be exact) to research and analyse.

Today however, conducting a 200+ county study with GIS is entirely feasible, so one need no longer rely on a 1:100 extrapolation. And as we’ll see, scaling the study down to 1:1 (in other words, examining each county individually with no extrapolation) casts serious doubt on the plow-as-primary-cause theory.

But wait! There’s more 😉 Geographic scale tells one story. Temporal scale tells another. Dust Bowl focuses on the 20’s (the decade where additional sod was ploughed) and the 30’s (when the dust storms rolled in). Cause and effect seem very clear in this context.

When we zoom out our temporal scale, however, we see that intense dust storms plagued the southern plains long before the plow tore up the native grasses. Those dust storms of the second half of the 19th century go largely unknown today in part because they were not the beneficiaries of 20th century mass marketing. In fact, newspaper editors in pioneer towns had good reason to want to suppress news about the dust storms. After all, how could any new settlers be attracted to such a place? It is a wonder any record of these storms exists at all.

So, how does one go about counting dust storms? Historian James Malin decided to sift through forty years’ worth of Kansas newspapers and documented “evidence of intense, routine, and anticipated dust storm activity at dozens of locations throughout the state… including many years when dust storms were daily or nearly daily occurrences for a month or more, and some years — 1855, 1879, 1880, 1881, 1894, 1895 — when they persisted for several months.” Sounds a lot like similar stories documented during the 1930’s, except that these storms occurred before the big plow-up of the 1920’s. 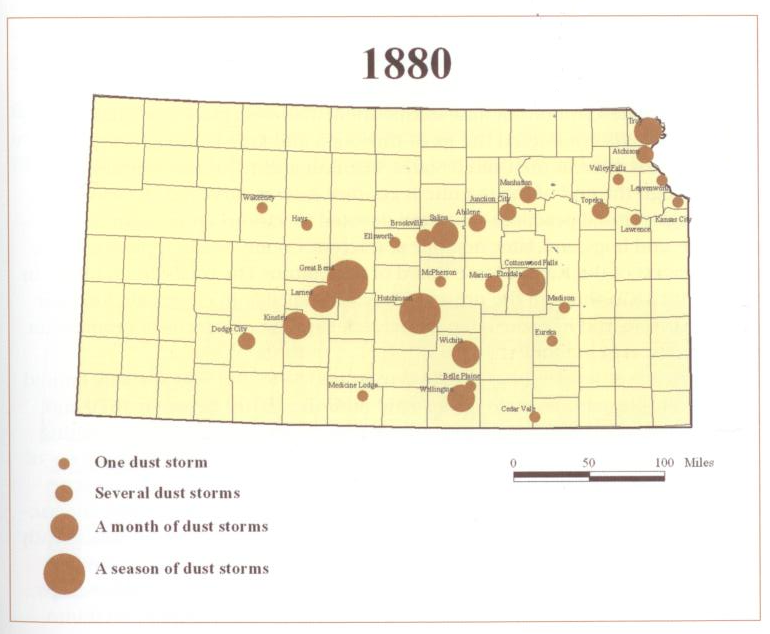 But newspaper articles aren’t very scientific, and we risk falling prey to the same poorly-scaled generalization claims levied against Worster’s Dust Bowl earlier. In this case though, the issue is not enough data. There weren’t very many settlements large enough for a newspaper in those early years, and we already know that editors were disinclined to talk about the storms, so the example map above doesn’t show where dust storm activity was greatest. It shows instead were it was known to have occurred. Such is the life of the historian — grappling with incomplete information and piecing together the scraps of what is left behind.

GIS users are probably much more comfortable working with census data instead of newspaper accounts, and Kansas is blessed with an abundance of systemic, quantitative, and thorough agricultural surveys beginning in 1874. By overlaying the newspaper accounts of dust storms with county areas devoted to crops, we get the sense that plowing grassland doesn’t directly correlate to dust storm causality.

— Sample maps from near the beginning and the end of the time series show wide spatial distribution across the state.

Cunfer’s essay goes into much greater detail and includes many more maps (including animated maps that cover all 208 counties) than I can include here, but suffice it to say that the study does a great job of calling into question the farmer-as-villain plot we’ve been led to believe. And the power of this study lies in the numbers, specifically the hundreds of dust storms over 200+ counties over 80+ years. Based just on those numbers, we can guess the story.

I’ll leave you with his concluding statements:

It appears that dust storms are a normal part of southern plains ecology, occurring whenever there are extended dry periods. They can originate in unplowed native grassland when it has been diminished by extended drought. Dust storm activity can be exacerbated or locally enhanced by plowing for crops, but that was not the sole and simple cause of the Dust Bowl.

See you next month.