Over Christmas, I had the opportunity to go ‘off island’. One of the pleasures of visiting Victoria, British Columbia is to go into Munro’s bookstore and to browse the shelves. In the same time frame, I received a gift, the book by Briony Penn entitled ‘The Real Thing. The Natural History of Ian McTaggart Cowan’. 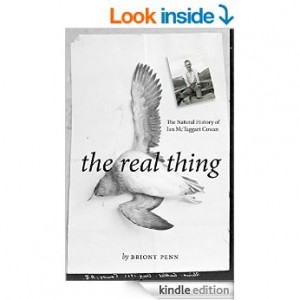 Penn is a writer of creative non-fiction and a geographer living with her family on Salt Spring Island, BC. She has been actively involved in a number of community mapping projects, including the community atlas of the Salish Sea. The Real Thing is a highly recommended tome of over five hundred pages documenting the life and times of Ian McTaggart Cowan. It is one of two biographies on Cowan published this year.

As a ‘natural history’, Penn has adopted a species approach to describing the activities of Cowan in relation to conservation in Western Canada and beyond. She has had remarkable access to diaries, collections and individuals.

In October, Penn was interviewed by Amy Reiswig for focusonline.ca (October 2015).

In Penn’s own words:

‘The most important thing about the book is that it shows people that as Canadians this is as much about our heritage as being hewers of wood. We were not just pioneering people who would destroy everything. Conservation is also a very strong tradition.’

‘We need to reclaim our identify as people who actually care about things – the environment, education, kindness, scientific and naturalist traditions – because they inform us about how well we’re going to live in this world’.

‘When people start erasing history, this is what they want to erase because it’s dangerous to them’.

Penn does an excellent job of describing the history of conservation in British Columbia through the lens of McTaggart Cowan.

Our year on Haida Gwaii is almost up. It is time to return to the East coast.

Access to the descriptions of wild, beautiful British Columbia found in the biography of McTaggart Cowan raise a number of ‘to be answered’ questions about the natural history and conservation on the East coast. We have been fortuitous to have had the opportunity to see again the Canadian landscape from both sides of the continent, along with the associated cultural and community context.