It’s two years now since Roger Tomlinson passed away.  Roger’s and my career path have crossed several times over the last fifty years and what follows is my remembrance of the man and some of his work.

In 1969, I enrolled in the Geography graduate program at the University of Western Ontario. My supervisor was Dr. Michael Goodchild. It was the time of the ‘quantitative revolution’. Michael was teaching Quantitative Methods and Location/Allocation Analysis. We had a new Department Head, Bill Warntz who joined us from the Harvard Laboratory for Computer Graphics and Spatial Analysis.  At the time, Roger Tomlinson was handing over the legacy of the Canada Geographic Information System CGIS and The Canada Land Inventory (CLI) to Ian Crain, and later Brian Rizzo, plus Joe Arbour. Roger with Lila (his wife) had established Tomlinson Associates Ltd (TAL) Consulting Geographers and it was there that I would get to know him.

Under the guidance of Roger and Lila, TAL had a number of Associates. This included Michael Goodchild and myself, plus several others. Part of our work was to use what we called, “The Tomlinson Method.” The Tomlinson method was being used to evaluate, benchmark and plan for the acquisition of GIS technology. My first experience was working with Roger on the New Brunswick Natural Resources benchmark. Our clients were Peter Andrews and Thom Erdl. It was a very political situation, since Fredericton was the home of Universal Systems Ltd. with Drs. Sam Masry and YC Lee with the CARIS system. NB Natural Resources became the first Arc/Info installation in Canada. I continued to work alongside Roger applying his methodology in Nova Scotia with Nova Scotia Department of Agriculture, NS Department of Natural Resources, Minas Basin Pulp and Power. Again, there were competing systems. For example, the Geobased STRINGS system was in use at MRMS in Amherst, later it became the NS Geomatics Centre.

My last GIS functional requirements study with Roger was the City of Ottawa between 1988-90. At that time, we stayed for a while, with my young family, at Roger and Lila’s house in Ottawa. I was impressed by Roger’s wine cellar, as well as his remarkable library on spatial data handling and GIS. My young boys were impressed by an enormous polar bear rug in one of the bedrooms.

A key component of his methodology was working with users to create information product descriptions (IPD). These descriptions defined in map and report form, what the user wanted to see on their desk from the GIS. For each IPD, it was necessary to define all of the data inputs, as well as the sequence of steps or functions required to create the product. In this work, Roger had defined the language of GIS.

These consulting assignments were undertaken into the late 1980’s. Subsequently, Roger collaborated with Larry Sugarbaker (another early adopter of GIS) to put together the highly successful Executive Seminars on Planning for GIS. They became a regular fixture at the Esri User Conference, first in Palm Springs and then later in San Diego.

Working with Esri Press, Roger distilled this work into ‘Thinking about GIS. GIS Planning for Managers‘. Today, I have a copy of the Fifth Edition published in 2013.

The College of Geographic Sciences

Roger was instrumental in the naming and recognition of the brand ‘College of Geographic Sciences’. In his early days, Roger had been a sessional instructor at Acadia University. One of his Teaching Associates (TA) was John Wian. By the mid-1980’s John was Vice-Principal, Nova Scotia Land Survey Institute in Lawrencetown. With the addition of the Department of Computer Programming, alongside Cartography, Planning and Remote Sensing, John recognized the need for a new brand that reflected the expansion of the institute beyond its tradition of training surveyors for Eastern Canada. He had in mind something similar to the International Institute for Geo-Information Science and Earth Observation in the Netherlands. Interestingly, it was about this time, 1986, when Survey Engineering at UNB was redefined as Geomatics Engineering.

Another occasion when Roger, Michael Goodchild and myself crossed paths was the GIS Summer Institute at COGS. We recognized that there was a unique computing laboratory environment at the College. Michael approached the Canadian Cartographic Association (CCA) to fund a Summer Institute for university Geography faculty interested in establishing GIS courses at their institution. This Summer Institute was held twice in the late ’80’s. Roger participated and provided the industry and keynote perspective. Michael provided the perspective from academic Geography. I provided the COGS view, as well as engaging the graduating students at COGS, who acted as mentors to the visiting faculty. Graduates from the Summer Institute included Peter Keller (UVIc), Brian Klinkenberg (UBC) and Brent Hall (UW) plus a number of others from across Canada and the US. 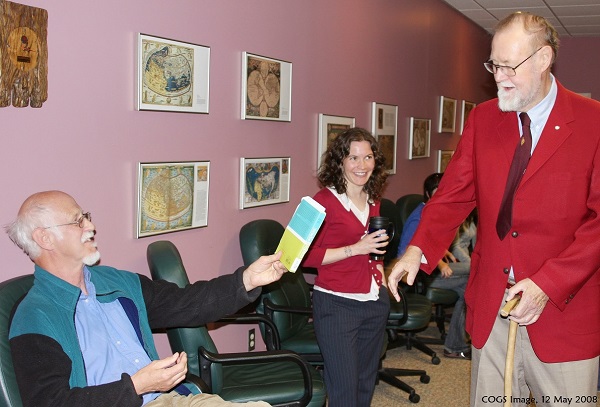 For the next twenty years, Roger, Lila and I would cross paths in Palm Springs at the Esri User Conference. In 2008, Roger was awarded an Honorary Doctorate at Acadia University. I had the privilege of introducing him and his contribution to Geography and GIS. Afterwards, we had dinner, good food and wine, at the Blomidon Inn, Wolfville. We were joined by Sally O’Grady and Adrian. At that time, Roger was completing a major assignment on the application of GIS for the Parks Canada Agency. Sally was Information Manager at Kejimkujik National Park. John and Jane Wian were there. John having recently retired from COGS, which was now part of the Nova Scotia Community College (NSCC).

For those fortunate enough to attend the GIS Summer Institutes at COGS, there will be enduring memories of John Wian’s lobster boils on the shores of the Bay of Fundy, with the sun setting over the water. Roger, always a striking figure, talking about some aspect of GIS.

Roger, as a Consulting Geographer, spent time as President, Canadian Association of Geographers. He expressed his opinions about Geography, GIS and the needs of industry and government. These remain concerns today.

Roger was not a ‘big fan’ of the term Geomatics. I remember well his comments in 2000, when we defined the Applied Geomatics Research Group at the NSCC. Even though, I stressed that ‘my definition’ was about a suite of technologies: GIS, Remote Sensing, GPS, LiDAR,sensor networks and UAV’s. He would have none of it. Since that time, I too have embraced the need for the language of Geography, just as Roger talked about the language of GIS.

Roger (in 1957), Goodchild and myself emigrated in the ’60’s to Canada. We recognized the importance and richness of the Geography, both the natural as well as the cultural landscape.

Roger was a tall man. He always travelled first class. He was ‘first class’ in his endeavours. In my mind, I link him with Pierre Berton and James Houston, story tellers about Canada’s North and its people. This parallels the new work by the knowledge keepers of today, for example, Stephen Augustine at Cape Breton University on the Mi’kma’ki.

My last recollection of Roger, with Lila, was likely San Diego in 2011. It’s two years now since he passed away. I like to imagine that the community mapping work that he supported in San Miguel, Mexico continues in his memory.